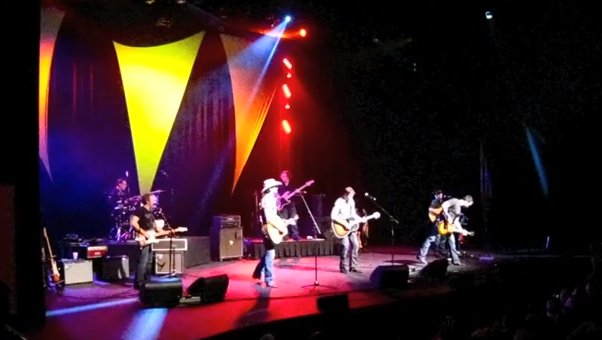 Country music fans across Canada agree the first ever CMT Hitlist Tour featuring Dean Brody, Aaron Lines and Deric Ruttan was a hit! Selling out multiple venues across the country on the 26- date tour, audiences were treated to an interactive show which featured the trio performing classic cover songs, an acoustic guitar pull and individual sets of their greatest hits. Garnering great acclaim and attention from media around the nation, the CMT Hitlist Tour public relations campaign has gained a reach of over 30 million within just one month.

In addition to showcasing three of Canada’s hottest male country stars, the CMT Hitlist Tour allows concert-goers to vote for some of the songs on the set-list by visiting www.cmt.ca/cmthitlisttour. Brody, Lines and Ruttan performed the top four selections as voted by concert-goers in each city. Fans also had the chance to meet their favourite artist at autograph sessions set up at the end of each concert. 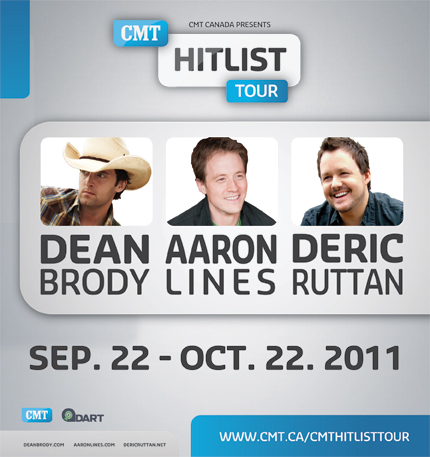 Dean Brody led the Canadian Country Music Association Awards with three award wins last night at Copps Coliseum in Hamilton, ON. Receiving top honours, Brody took home Album of the Year for Trail In Life, a category which included fellow nominees Johnny Reid, George Canyon, Carolyn Dawn Johnson and Aaron Lines. In addition, Brody won Single of the Year and Songwriter of the Year for his single “Trail In Life.”

Open Road Recordings also received awards in the categories of Album Design of the Year for Trail In Life (Dean Brody), Website of the Year (www.deanbrody.com) and the All Star Band Awards – Guitar (Jason Berry of Dean Brody)

Internationally recognized singer-songwriter Dean Brody has just received five Canadian Country Music Association Award nominations including Male Artist of the Year, Album of the Year, Single of the Year and Songwriter of the Year. Brody is also a contender for the 2011 Fans’ Choice Award. His sophomore 2011 JUNO Award nominated album Trail in Life has seen four singles to date chart in the top ten (“Wildflower”, “Roll That Barrel Out”, “Trail In Life” and “People Know You By Your First Name”) and two videos (“Trail In Life” and “Roll That Barrel Out”) reach #1 with CMT Canada. His latest single “Little Yellow Blanket” has just entered the top 40 on the U.S. Billboard charts. (Vote Dean for 2011 CCMA Fan’s Choice award at www.ccma.org now until Sept. 9)

Accomplished singer-songwriter Deric Ruttan has earned five 2011 CCMA nominations including Male Artist of the Year, Single of the Year, Songwriter of the Year and CMT Video of the Year for his 2010 hit song “That’s How I Wanna Go Out.” Additionally, his independent record label Black T Records has been nominated for Record Label of the Year. Ruttan released five singles from his 2011 JUNO Award nominated album Sunshine that landed him in the top 15 on the Canadian country music charts. The second single “Up All Night” was the most played Canadian country song of 2010. Ruttan is currently preparing to release his new live album Up All Night – Deric Ruttan Live in September 2011.

Reigning as the most played Canadian country artist on country radio from 2000-2010, Aaron Lines has earned a 2011 CCMA nomination in the category of Album of the Year for his 2010 release Sunday Afternoon. Contributing to Canadian country music for over a decade, Lines has won many coveted awards including Male Artist of the Year and The Rising Star Award at the 2004 CCMA’s.