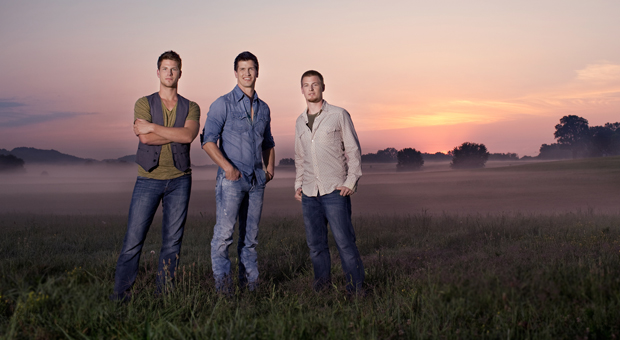 High Valley is a country trio of brothers; Brad, Bryan, and Curtis Rempel. The Canadian-born siblings grew up in Alberta on a farm in the rural community of La Crete. “When you leave Nashville, if you get to the Canadian border, you are only half way home,” says Brad with a laugh.  “La Crete is parallel with Juno, Alaska, just as far north as Juno. Right now you can either cross the river on an ice bridge–so you are actually driving across the river–or you can take two and a half hours worth of gravel road to get there. It’s a pretty remote little town.”

The Rempel family relocated to Canada in a rather unusual fashion when the siblings’ paternal grandfather loaded his family onto a truck and drove them from Mexico to Canada. “Our parents were both born in Mexico in a Mennonite colony where they rode horse and buggy and had no electricity,” says Brad. “Then our grandfather bought an old gray truck and as a result, he got kicked out of the colony because that was against the rules to have a vehicle. So he packed up the family and immigrated to Canada with the family in the back of this truck. There were two families, four adults in the front and 20 children on the box and that’s how they made their move all the way to Canada.”

Life on their farm was dominated by faith, family, hard work and lots of country music. “We always heard Diamond Rio and Ricky Skaggs growing up,” says Bryan. “I love Blackhawk and I always liked listening to the Everly Brothers on the record player. George Jones was played a lot too.”

Brad was only 12 when the group began performing and Bryan was nine-years-old. Curtis, the youngest sibling, joined the group later on. The brothers performed at church camps then graduated to opening dates for major country acts. “In 2001, we recorded for the first time in Nashville,” says Brad, “and the following year we spent 110 days on the road, even though we were still in school and had part-time jobs.”

The guys then spent years paying their dues on the road and in the offices of Nashville. In 2007 the band released it’s first album, Broken Borders, but it was with the release of their self-titled second album that Canadian country fans started hearing them on the radio. Produced by Paul Brandt the album earned Juno and CCMA nominations and featured hits like ‘On The Combine’ and ‘A Father’s Love (The Only Way He Knew How).’
[mycred_video id=”tp00tCZnp4Q” width=”620″ height=”340”]

After extensive touring both in Canada and the U.S. the band went back in the studio, with producers Phil O’Donnell and Jeremy Spillman, and the result is their third record titled Love Is A Long Road.  Brad co-wrote most of the songs with veteran Nashville writers including Phil Barton, Danny Wells, and Neal Coty.  The album, which mixes the brothers tight harmonies with traditional country instrumentation, includes the album’s first hit, ‘Have I Told You I Love You Lately.’
[mycred_video id=”dmaWEc7ecMc” width=”620″ height=”340”]