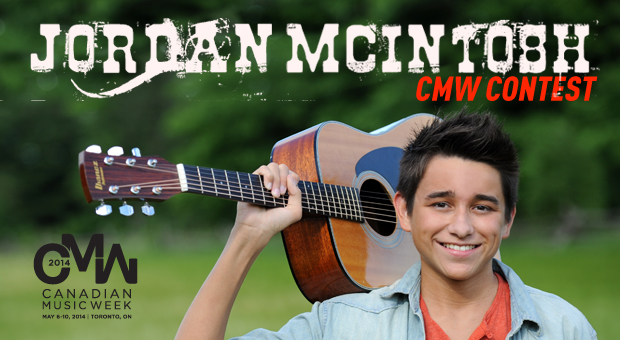 Jordan McIntosh will be performing a showcase on May 9 at Adelaide Hall with Brett Kissel as part of Canadian Music Week and to celebrate we’re giving away a Jordan McIntosh CMW Prize Pack!

The Jordan McIntosh CMW Prize Pack will include:

Contest closes Friday, May 2, 2014 (12:00 NOON EST) and is open to residents of Toronto and the surrounding area. Transportation will not be provided. The prize is valued at approximately $210.00 CAD. Winners must be 19+ and will need a valid ID to obtain the tickets/wristbands.

Check out our Q&A with him below and then scroll down to enter to win!

Q: How does it feel to be performing as part of Canadian Music Week this year?

A: It feels pretty amazing to be honest. Considering last year I had my own booth set up and performed for everybody walking by, hoping that people would stop and listen. Now this year I’ve got my very own showcase with two other amazing Canadian Country acts. It just shows how blessed I have been over the past year and I couldn’t be more grateful.

Q: The last time we spoke to you, you were just about to head out on the Young Guns Tour (with Brett Kissel & One More Girl) and now you’ve just recently wrapped it up! How was that whole experience for you? I’ve seen so many fun Instagram photos!

A: The entire tour was like boot camp but it was a lot of fun. I travelled the country, met fans that I hadn’t gotten the chance to meet yet, hung out with incredible people, and I learned so much. The last night of the tour was really upsetting for me because you create these amazing relationships with all these people and now you’re not going to see them for a while. I’ll never forget the entire experience… especially with all those Instagram photos, I’ll always be able to look back on the tour.

Q: What is one really important thing you learned while out on tour?

A: I definitely learned more than I imagined but I think one really important thing was how critical the crew is to the show. Of course it was the Brett Kissel & One More Girl show but without the crew, there’s no way the show could go on. It was really cool to see that, to learn about everybody’s role and how it helped bring the show together.

Q: What do you have planned for the summer and where can fans catch you performing?

A: I don’t think I’ve ever been more excited about a summer than this one. I’ll finally be releasing my debut album, hopefully exploring more with acting, and getting to play some amazing music festivals. I’ll be out in Manitoba at Dauphin’s Country Fest, in P.E.I for Cavendish Beach Music Festival, as well as Boots and Hearts and many more awesome places. Fans can always check my website (www.jordanmcintosh.ca) for a full list of tour dates. I can’t wait to get out on the road!