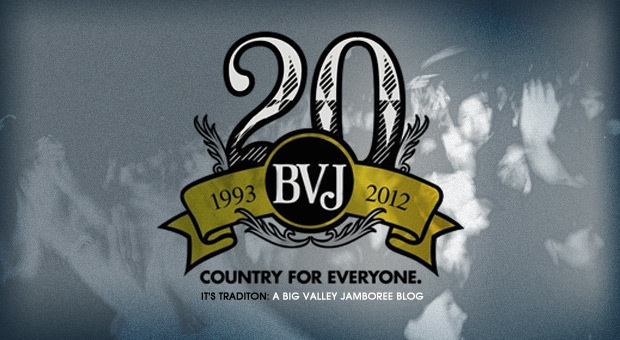 Well, another Big Valley Jamboree has come and gone. I now bring you part 2 of my BVJ blog. (You can read Part 1 here)

First of all, congrats to the entire BVJ crew on the most successful event in BVJ history – selling out all 3 days of the event. According to BVJ Producer Larry Werner, over 25,000 people went through the concert bowl gates each day, making for over 90,000 on site throughout the weekend.

The weekend kicked off on Thursday in the Molson Saloon with performances by Jordan Doell, Kira Isabella, Jason McCoy, Nitty Gritty Dirt Band, and Clayton Bellamy. All performers set the tone of what was to come for BVJ’s 20th. In Friday morning’s press conference, Larry Werner told the press that Bellamy’s performance stood out to him saying, “From start to finish Clayton brought it. He’s been a good friend of the festivals’ for a long time, he’s a great Alberta talent and I was beyond impressed with him.”

Bellamy also hosted the Axe Songwriter’s Tent on the midway throughout the weekend.

Friday brought performances on the mainstage from Sean Hogan, Myrol, Adam Gregory, Emerson Drive, Kellie Pickler, and Blake Shelton. Headliner Shelton brought his ‘Hillbilly Bone’ to Alberta and made the crowd of 25,000 feel like he was jamming around a campfire; cracking jokes, telling stories, and of course playing his hits. His personality made the show feel intimate, a quality I find so very impressive in an entertainer. Pickler and Emerson Drive don’t deserve to go unnoticed either. Pickler quickly became a BVJ favourite of the weekend, while Emerson Drive proved they are one of Canada’s top musical acts for a reason.

Saturday saw performances from Pear, The Good Brothers, High Valley, Thompson Square, Dwight Yoakam, and Toby Keith. Throughout a beautiful, sunny day with great performances from all the acts, there was bound to be a hitch somewhere. Environment Canada issued a severe thunderstorm warning for the Camrose area. Production and Keith’s crew decided it was best to delay his set by almost an hour. Soon after Keith hit the stage, the skies opened up and it POURED for what seemed an eternity. Toby and his crew ran off stage. Much to the fans liking after the storm passed, Toby returned to the stage and he finished his set – at almost midnight. It was made public earlier in the week that Toby had his gall bladder removed and played the show anyway. It a press conference on Sunday morning, Larry Werner told the press that Toby was supposed to be on two weeks of rest, but instead knew he had to play for his fans in Canada. Kudos to him for that!

Later that night, Aaron Pritchett rocked the Molson Saloon and finished his set just in time for the sky to open up once again. Thousands of fans were drenched for the second time that night. All for the love of music.

Sunday proved to be another beautiful BVJ Sunday with performances by The Heartbroken, Williams & Ree, Asleep at the Wheel, Michelle Wright, Kix Brooks, and Rascal Flatts. Canadian legend Wright sung to a packed crowd, playing her hits as well as songs of her latest album set to hit stores this fall. She proceeded to sign autographs for over two hours following her show. Brooks also proved that he can put on a show without Ronnie Dunn at his side, rocking the BVJ stage just as he did with B&D all those years. The weekend closer Rascal Flatts put on a energetic show start to finish and Gary LeVox’s vocals were spot on.

It was also announced that two of the 2013 BVJ headliners will be Alan Jackson and Lady Antebellum.

Congrats to everyone at BVJ, crew and fans alike for 20 successful years. Here’s to 2013 and beyond.