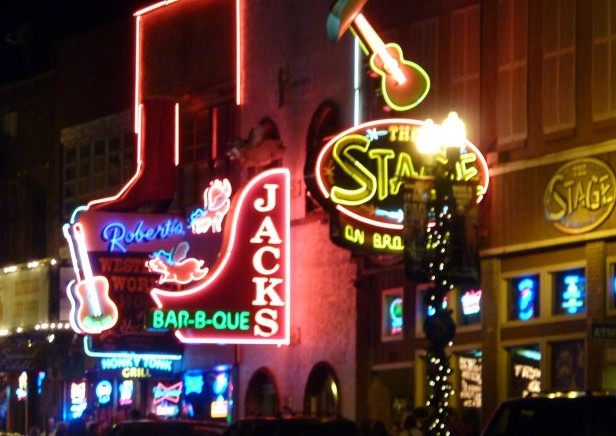 Every music fan needs to experience Nashville once in their life.  Music calls this city home.  Nashville’s culture is enriched with live music venues all around town. Let’s countdown a few great places where you can check out live country music on your next visit to Music City, USA, aka Nashvegas.

5. Robert’s Western World – Located right in the heart of Lower Broadway, Robert’s is the best hillbilly bar in the city.  This is the home of traditional country music in Nashville.  The venue became world famous in the 90’s when its house band, BR5-49, started packing the club, then landed a record deal and then radio hits, playing traditional country in the country-pop-filled 90’s.  The short order food is terrific, live music is always playing (don’t forget to tip), and it’s open to all ages until 10:00 p.m. Oh yea, and you can purchase a pair of cowboy boots right off the wall.

4. Wildhorse Saloon – Located on Second Avenue downtown, the Wildhorse Saloon is one of the largest live music establishments in town. Featuring horse statues all around the 3-floor restaurant and bar, you can watch live music, get lessons on how to line dance, and also grab some of the best food the south has to offer. A line dancer’s paradise.

3. The Stage on Broadway – This is one of the most famous bars on Broadway for the fact that both tourists and local Nashvillians flock to hear great music that is played on the large stage (lots of rockin’ country bands). Many artists including Brooks and Dunn have held their fan club parties here during CMA Music Fest (formerly known as Fan Fair). As well it has been featured in many movies, most recently the Tim McGraw, Gwyneth Paltrow film Country Strong.

2. The Tin Roof – This local favorite hangout is one that you must experience. Located on Demonbreun Street, many of the NHL’s Nashville Predators hang out here and its walls feature both music and hockey memorabilia from the team (many of whom are Canadian!). It also is the nightlife hotspot for many students from Nashville’s Belmont and Vanderbilt Universities. Its entertainment lineup varies from Songwriter nights, to full bands featuring both country and rock. There’s something for everybody here.

1. Tootsie’s Orchid Lounge – Located on Broadway and across the back-alley from the Ryman Auditorium (former home of the Grand Ole Opry), this bar, named after the long-time proprieter/bartender, Tootsie Bess, could tell many stories if its tobacco-stained walls could talk. Full of memorabilia, many artists kick-started their careers at the club, including Canadians Terri Clark and Crystal Shawanda. As well, legends such as Hank Williams, Kris Kristofferson, Patsy Cline, and Willie Nelson would sneak back and forth to drink here in between their sets at the Opry back in the day. You can feel and see the history when you walk inside this very small bar. Head up the stairs at the back and check out the autographed ceiling.  Kris Kristofferson’s is easy to find.  This is the number one venue you need to visit in Nashville! The venue celebrated its 50th anniversary in 2010.  Here’s Terri Clark to tell you a bit about the place…