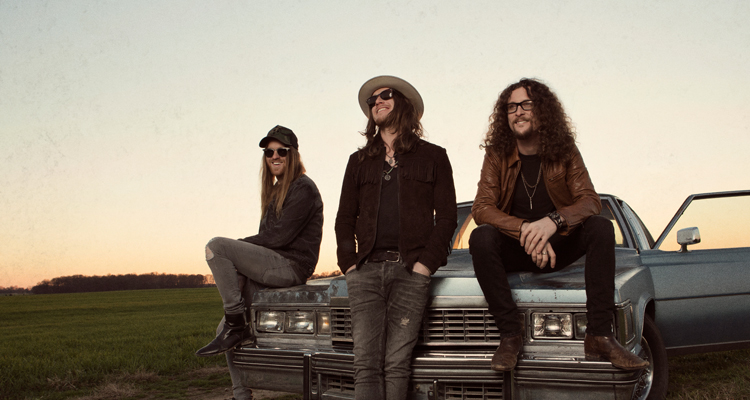 BURY ME IN MY BOOTS Due Out August 5

As anticipation builds around their August 5 album release, BURY ME IN MY BOOTS, THE CADILLAC THREE are keeping a steady buzz. Fans can pre-order the album now and instantly download select tracks now: http://smarturl.it/TC3BuryMeInMyBoots. Beginning today (7/28) with “Graffiti,” they will premiere a series of music videos for select tracks: “White Lightning” (8/1), “The South (8/4), “Running Red Lights” (8/8) and “Peace Love and Dixie” (8/12). Watch now. These exclusive versions were filmed live at the legendary Abbey Road studios in North London.

Nashville’s best-kept secret – Jaren Johnston (lead vocals), Neil Mason (percussion) and Kelby Ray (lap steel) – has been embraced across the globe for their ready-to-party tunes and no bullshit Southern charm. Hovering between radio-ready Country anthems, hard-and-heavy Rock ballads and traditional Southern folk, the trio each contributed writing credits across the 14 tracks on their long-awaited Big Machine Records’ album, including their current single “Drunk Like You.” Earning ACM and Grammy nominations, Songs Jaren Wrote are highlighted with chart-topping hits for Jake Owen, Frankie Ballard and Keith Urban, in addition to singles for Tim McGraw and Dierks Bentley as well as co-writer/co-producer for iconic Aerosmith frontman Steven Tyler’s new solo project. Neil has contributed to recent songs recorded by Rascal Flatts, Miranda Lambert, A Thousand Horses and more, while frequently collaborating with Jaren and Kelby for TC3’s catalogue.

Having established a loyal following in the UK with multiple sold-out headline dates and substantial radio airplay on Planet Rock and Radio 2, TC3 will return to the UK for their Don’t Forget The Whiskey Tour in November. Tickets are available now through Live Nation.

Rolling Stone deemed, “Like Kings of Leon before them, they’re poised for their first big break in the U.K. — where they’ve sold out every headlining show for nearly two years — before conquering their U.S. home turf.”

TC3 has been invited to showcase their unapologetic charisma and high-energy performance during an episode of FRONT AND CENTER, airing later this fall on PBS. A limited number of tickets for the taping on Monday, August 1 at Iridium are on-sale now: smarturl.it/tc3nyc.

Currently, TC3 is on the road with Florida Georgia Line’s DIG YOUR ROOTS TOUR that makes stops nationwide throughout October.