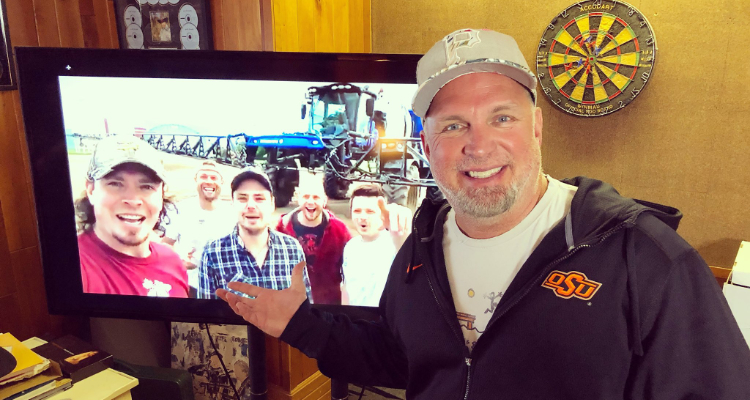 On June 14, Hunter Brothers took to Facebook Live to sing a parody of Garth Brooks’ “I’ve Got Friends In Low Places” – calling it “I’ve Got No Grain In Dry Places”. The band of brothers are no strangers to viral videos. In their previous parodies, they’ve sung about their combine and tractor tuck, with both videos reaching over 1 million views. This time around, there was no chance of anything getting stuck due to a severe lack of rain. In true Hunter Brothers fashion, they decided to sing about it and created “I’ve Got No Grain In Dry Places”.

Fast forward to Monday night when Hunter Brothers’ phones started blowing up because Garth Brooks watched their video during one of his Facebook Lives. To say the band was ecstatic would be an understatement.

Ty Hunter, Hunter Brothers’ lead singer (and the youngest brother), shared “I am still trying to process the fact that Garth Brooks watched our video on Facebook live. I wrote that parody while sitting up in a tractor cab, not ever thinking about the fact that the legend himself would see it. I remember being at his concert, just sitting in awe of the experiences he has been able to create for so many people across the globe. I have a lot of admiration for what he has accomplished, so this is most definitely a moment to remember.”

Check out Garth Brooks’ reaction to their parody below.

Watch Hunter Brothers’ full parody here and fall in love with the band of brothers!