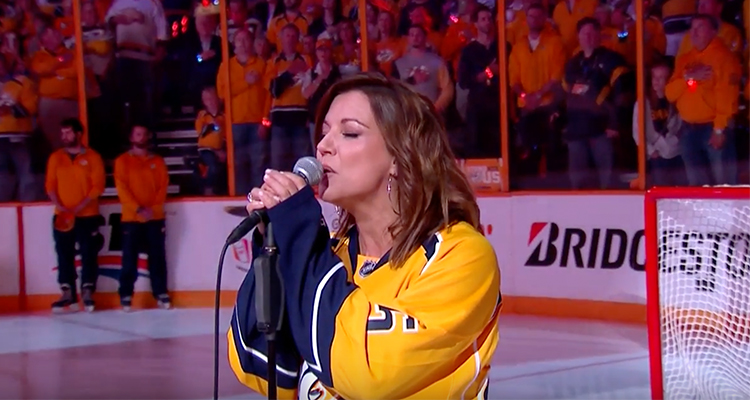 NHL Takes Over Nashville: Country Stars Cheer On The Predators

We wish we were there too, Jordan.

Really wishing I was in #Smashville tonight w @budfisher cheering on the @PredsNHL! LET’S DOOOO THIIIIIISSSS 💥💥

Game 3 in Nashville was a star-studded event. Everyone from Carrie Underwood to Keith Urban to Nicole Kidman to Connie Britton was at Bridgestone Arena last night.

Martina McBride had the honour of singing the National Anthem at the Nashville home game.

Possibly the most nerve-wracking thing I've done. And such an honor. Such a mix of emotions. But the most important thing: GO PREDS!!!!!!

Seriously in love with Keith Urban and Nicole Kidman.

Seriously, ALL of Nashville is fired up right now. #StanleyCup pic.twitter.com/eMTLLN1yvV

When it was clear the Predators were going to win, the crowd went WILD.

@PredsNHL I think we got this game boys! #StandWithUs

Although it seemed every country star was cheering on The Predators last night, it’s pretty safe to say Carrie Underwood is their #1 fan.

Hands go up… YEAH, BABY!!!! Preds played like Preds tonight and the score showed it…Way to go @predsnhl ! And this crowd was CRAZZZZZZY!!! #Smashville #StanleyCup