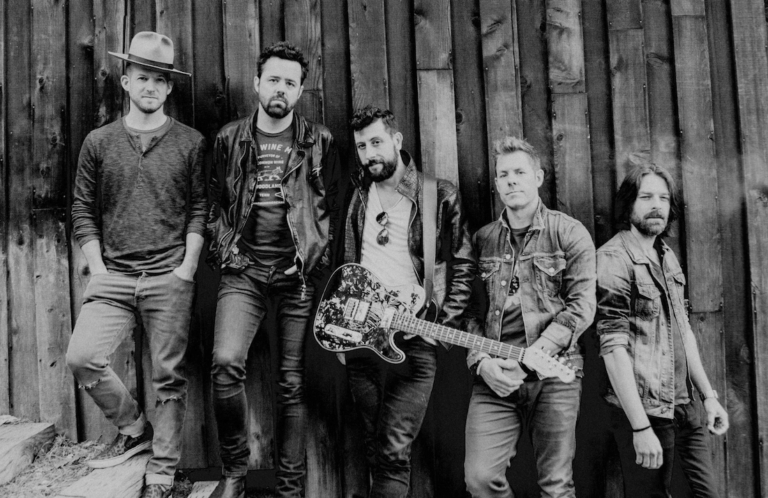 Old Dominion Exclusive: She Broke Up With Him, Writing of Snapback, Tour Plans

It’s been an amazing year so far for Nashville country group, Old Dominion. Their debut single ‘Break Up With Him’ reached #1 at country music radio for multiple weeks, and their second single ‘Snapback’ is floating around the top of the US and Canadian charts as I write this. Earlier this month they were named the winners of the Academy of Country Music’s (ACM) Award for New Vocal Group of the Year; and tomorrow (Saturday April 23rd, 2016) they head out on tour as the openers for Kenny Chesney’s ‘Spread The Love’ tour along with country superstars Miranda Lambert and Sam Hunt!

In my interview with Old Dominion guitar man Brad Tursi, he says of their ACM win:

It’s been crazy. We are honoured and humbled to win. There’s a lot of other great friends and artists in that category and we can’t believe it.

Did she ever end up breaking up with him?

She did! Sounds like a lot of people did. We got a lot of crazy response to that song. People telling us that “me and my boyfriend aren’t together because of your song, I broke up with him”. I feel like it probably hurt some people but it brought some people that were supposed to be together, together. Which, I guess, is the best thing.

Did you write the song together as a band about someone’s certain scenario?

We wrote it as a band. Most of the time we’re just trying to make each other laugh. It started as a groove at sound check. The music came first. Matt (lead vocals) and Trevor (guitar and keys) worked on it together in the back of the van one night driving in the middle of the night whispering into their phone. I think they were trying to not wake us up. Matt had the idea of a one-sided phone conversation so he was just whispering into his phone saying “hey girl… what’s up” trying to be quiet. But it’s not about one person in particular.

We wrote that in the back of the bus. I’ll bring my computer out sometimes and I’ll start some grooves to get some inspiration going. Matt and Trevor came back and seemed to like the vibe. Matt had the title “snapback” (because we see a lot of guys and girls out in the crowd wearing them) and then it started from the first line. One of the guys (in the band) asked, “strictly out of curiosity what would happen if we changed this chord”, so Matt started singing “strictly out of curiosity, what would happen if you got with me” and we all laughed and wrote the song from there on.

What do you think the next album single will be?

Was this your first time working with Shane McAnally?

It was my first time. He had known Matt and Trevor prior, they had been in Nashville writing together for many years before. Shane was ‘hit producer Shane’, before any of them had success – they were writing together. It was a natural choice to work with him because they had been working with him for so long. He has a great ear for songs and he really knows how to make decisions in the studio. When we’re doing something terrible he tells us and when he hears something good he tells us too.

Which Meat and Candy song did you like recording the most?

My favourite to record was probably “We Got It Right” the last song on the record. We played it down as a band with minimal overdubs and it felt really nice in the room, like we were creating music together. Sometimes you put it together piece by piece (instrument by instrument) but that one was played down and captured at once which was really nice.

When you finished We Got It Right did you know that was the last song and that the album was complete?

I don’t know if we recorded it last. But we definitely thought that it would be the last song on the record right away. It has a very ‘closing’ sort of feeling to it. It was destined to be the last track for sure.

Yes! We were on tour last summer with Kenney and it was just such an amazing experience to get to play those stadiums. We would play the stadiums on the weekend and then dive bars all week and then back to the stadium. It was definitely something to look forward to last time, so it’ll be amazing again. To get to go back and work with Kenney and the band and the crew it’ll just feel like coming home. And to watch Miranda and Sam, they’re some of my favourite artists in country music, so I think it’s going to be a great tour for the fans. Each act brings something different to the table, they’re all really musical. I think it’s going to be a great summer for sure.

Do you have any crazy production for your stage show?

(Laughs) For the stadium shows we’re first on so we only have 25 minutes or so, and I’m sure the sun will still be out, so I don’t know what we can do that’s too crazy. For the amphitheater shows where it’s just us and Kenney we’ll have a longer set, and we have a lighting guy this year so I’m sure he’s got some tricks up his sleeve that’ll make us look cool somehow.

What’s the funniest thing that has happened on stage?

Matt our singer he fell down pretty good at one of the last shows. He came running back up the thrust and went to jump up on the drum riser but he fell and landed flat on his back. We all thought he was hurt pretty good, but he got up and shook it off. He was definitely feeling it for weeks after. So I guess that was pretty funny.

What do you do after something like that? There’s nothing you can do but keep going.

Exactly. I mean everybody saw him so you can’t pretend like it didn’t happen. It happens to the best of them – I mean look at Dave Grohl falling off the stage and breaking his leg last year.

What’s your favourite thing about Canada?

I gotta say we were all so surprised at the fans up in Canada, our first time up there was at Boots & Hearts, and we didn’t know what to expect. But we had tons more people than we thought singing along to Break Up With Him, so I’m going to have to say the country music fans are our favourite thing about Canada.

Check out olddominionband.com/tour to get your tickets to see them perform live this summer. Canadian shows include June 9th at Molson Amphitheatre in Toronto, ON, and July 10th at Cavendish Beach Festival in PEI.