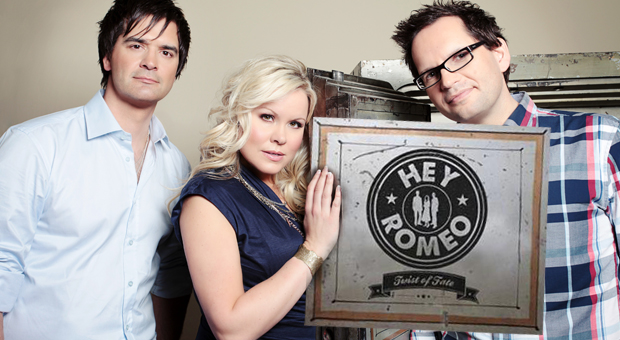 When Hey Romeo‘s Stacie Roper, Darren Gusnowsky, and Rob Shapiro started writing for album number three, they were obviously excited about making another record. But, fate dealt them a card they didn’t quite see coming one night in Hamilton, Ontario last fall.

During the CCMA Awards broadcast on CBC in September, Hey Romeo walked away with 2011 CCMA Group or Duo of the Year. The ante was definitely upped when it came to the next project and after months of writing and recording in both Nashville and Alberta, Hey Romeo’s Twist of Fate dropped in stores and online on June 26, 2012. Was it worth the wait? You bet it was.

Hey Romeo doesn’t just get on stage every night and play these songs, they are 100% involved with the evolution of these songs every step of the way – which is probably what makes this project so special. The three ‘Romeos’ have written, produced, and played on these tracks. Darren Gusnowsky and Rob Shapiro don’t go unnoticed with their respective guitar and keyboard talent mixed with perfect harmonies in all the right areas. Stacie Roper‘s honey soaked vocals are showcased exactly the way they should be with her partners’ harmonies blended only the way a great producer (Byron Hill) can. Hill also co-wrote many of the tracks including ‘Maybe You Remember Me Now’ and ‘It’s a House’.

Stand out tracks include the Carolyn Dawn Johnson co-writes ‘Outlove You’ and ‘If Only I Could Fly’. Also on the disc, a Victoria Banks co-write called ‘Night Out With the Girls’, which is sure to be an anthem during Hey Romeo‘s live shows.

Front to back, every country music fan needs this in their collection; it portrays songs of love in all its forms. The lead single, ‘Jump Back In’ is now at country radio and is climbing the charts. The video is also being played on CMT Canada.

Haven’t yet picked up Hey Romeo’s Twist of Fate? Check out www.heyromeo.com for more information.