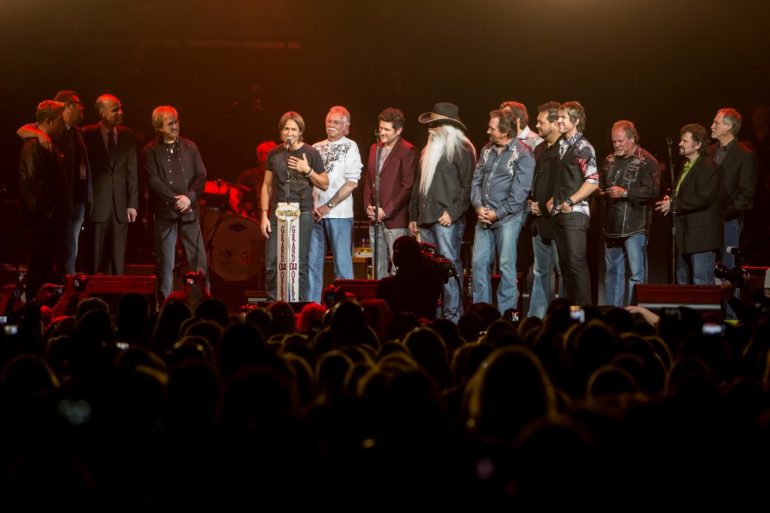 Urban invited to be next Opry member

Last night in front of a packed house in Nashville at Bridgestone Arena for the annual benefit All for the Hall, Vince Gill and Rascal Flatts asked Keith Urban to become a member of the Grand Ole Opry. Gill and the Flatts brought out a duffle bag on stage and told Urban they had a surprise for him. As he unzipped the duffle bag, he quickly saw the famed microphone from the Grand Ole Opry. Urban covered his face in surprise and said, “I don’t know what to say – but first, YES! Thank you very much to everybody at the Grand Ole Opry who made this possible. I’m shocked. How beautiful for this to happen tonight of all nights.”

Urban will be inducted on Saturday April 21, and will be the first Opry member to be born outside of North America.

All for the Hall was co-founded by Urban and Gill, which benefits the Country Music Hall of Fame in Nashville. This is the third consecutive year the event has sold out. Last night, fans saw performances by Lady Antebellum, Little Big Town, Thompson Square, and also Hall of Famers Don Williams and Merle Haggard, among others.

Urban has sold over 15 million albums, including his latest, Get Closer, which features the hits ‘Without You’, ‘Put You in a Song’ and ‘You Gonna Fly’. His unique vocals, songwriting, signature guitar playing chops, and his high-energy live show have allowed him to have success all around the world. Definitely all worthy of an Opry membership. Congratulations, Keith!