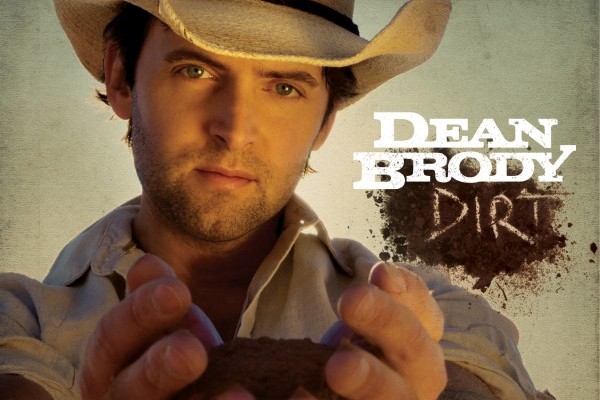 Lesson one in how to endear yourself to the entire female population of Canada? Record and release a steeped-in-summer, sing-along anthem that extolls the unique, admirable virtues and loveable characteristics of our country’s fairer sex. Dean Brody did just that this spring with the release of ‘Canadian Girls.’ Then, we watched that song take less than two months to shoot straight to the top of the national country radio and digital charts, becoming the first Canadian track to reach #1 since Terri Clark‘s ‘In My Next Life’ in February 2008. It may also be the first homegrown hit to name check that tent pole of Canadian TV pop culture, Degrassi Junior High. All in all, ‘Canadian Girls’ couldn’t have been a better ambassador to herald the release of Dean’s highly-anticipated, third studio album.

Besides it’s chart busting lead single, Dean Brody’s Dirt looks set to kick up plenty of airplay dust with its satisfying and varied collection of homespun charmers, rootsy, romantic mood-setters, and a snicker inducing, tongue-in-cheek tale or two. Dirt is all about the stuff in life that binds us together and keeps our feet firmly planted on the ground. It’s a family photo album or high school yearbook thrown open to expose every magic moment captured cover to cover. The through line is Dean’s smooth, smoky baritone with just a hint of the album title’s grit.

Building on the sentiment of previous top ten hits like ‘Little Yellow Blanket,’ Dean shows he clearly knows his way around a love scene on Dirt. Small town stories of a lifelong love’s first blush (‘Flowers In Her Hands’), are nestled up with creating an ideal outdoor atmosphere for two where “there’s nothing more romantic than campfire smoke” (‘The Sleeping Bag Song’) and parking (‘Underneath the Apple Trees’) with someone he’s yet to meet and “hold in my arms ’til we both fall asleep.”  ‘Losing My Balance’ is a powerful paean to that heady moment when love is undeniable and he’s “drunk on the potion and taste on your lips.”

In between all the romance there’s plenty of room on Dirt for some plain ol’ partying and playing around. The inspired addition of Great Big Sea to the Maritime pub stomper ‘It’s Friday’ for a grinning Celtic cousin to Dean’s 2010 top ten island flavoured hit, ‘Roll That Barrel Out.’ The Paisley-esque title track ‘Dirt’ pays tribute to what’s under our feet as the glue for the fabric of our lives. The album’s biggest surprise, ‘That’s Your Cousin,’ gives a big humorous wink to backwoods stereotypes, “We need a little separation in our gene pool. Don’t be touchin’. That’s your cousin.’ The “Dueling Banjos” intro to that song provides the first chuckle of many.

With Dirt, the triple 2011 CCMA winner shows us deeper glimpses into moments that matter to both head and heart. If his reigning CCMA Album of the Year Trail In Life pointed him in the right direction for long lasting success, Dirt will add a whole lot of traction to Dean Brody’s career path.