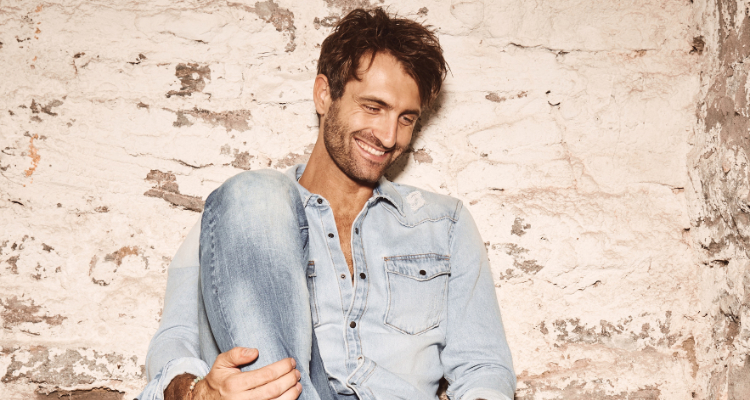 If you listen to country music, you’ve definitely heard a song written by Ryan Hurd. He is known and respected among Nashville’s elite as an acclaimed songwriter. Some of his most recent work includes co-writing Blake Shelton and Ashley Monroe’s Lonely Tonight as well as Luke Bryan’s number one hit Sunrise, Sunburn, Sunset. He has also toured with names like Thomas Rhett and Chase Rice. Ryan Hurd does it all!

Ryan Hurd’s self-titled EP has amassed over 60 million streams and one of his latest singles, To a T has racked up over 12 million alone! His wife Maren Morris even makes an appearance singing background vocals on the track. Talk about a hit!

The song is very important to Ryan and truly marks his transition from songwriter to big time recording artist. Here’s an exclusive quote from Ryan Hurd on To a T:

How is “To A T” different from your past music? Both sonically and lyrically?

“It’s really nice to put out something that isn’t purely biographical but still is very true to me as a person and artist. “Love in a Bar” was our story, told exactly the way it happened. “Diamonds or Twine” was intended to be a moment, a true story and also a marker in our life. This is such a real song, but it’s a step removed from my actual personal life, even though it’s still personal. “To a T” is sonically true to what we’ve done before but taken to another level. Adding Dann to the mix with the work that Aaron and I have been doing has added another layer of musicianship and hitmaking that has been so exciting, and I feel like it’s a combination that really has connected and made some amazing music.”

Country music is truly in a great place with Ryan Hurd writing and recording. We can’t wait to hear what he brings us next!

Last November, we caught up with Maren Morris and Ryan Hurd on the red carpet at the 52nd CMA Awards. Watch below to see what they had to say about their ideal date night and Canada!