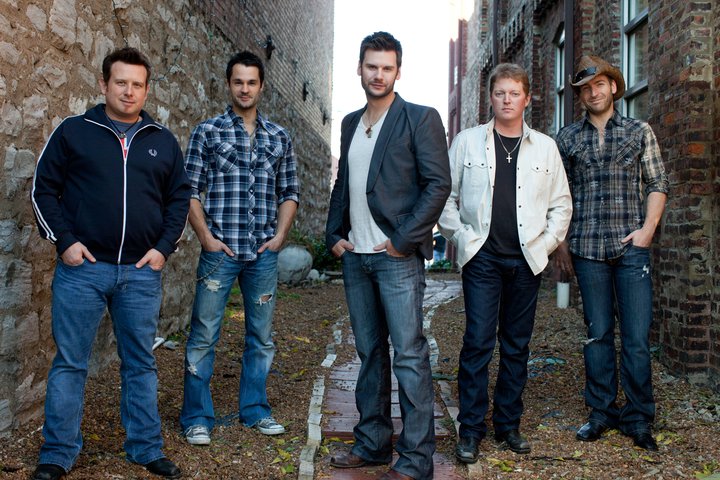 Emerson Drive packed the house at the C2 Field House in Bonnyville, Alberta last Friday night, even with a snow storm brewing outside.

Opening act Brett Kissel performed in front of his hometown (he grew up on a ranch near Bonnyville) with roaring applause. Kissel kicked of his set with his self penned ‘Canadian Kid’.  He also delivered covers of some of his favorites including Paul Brandt‘s ‘Alberta Bound’, and Gary Fjellgaard‘s ‘Would You Dance With This Old Cowboy’, a tribute to his late grandparents. He also shredded his way through an impressive guitar solo during Johnny Cash‘s ‘Ring of Fire’.  It’s safe to say his hometown is proud of their rising star.

Emerson Drive kicked of their set with one of their biggest hits, ‘I Love This Road’, something the boys of ED know a lot about. They’ve now spent over 10 years on the road as Emerson Drive. They celebrated the release of their greatest hits collection last year when Decade of Drive hit shelves. As they ripped through many of their hits including ‘Fall Into Me’, my personal favorite ‘November’ and their #1 Billboard US hit ‘Moments’, I was reminded how great this band really is. The crowd is 100% engaged in the show and know every word to every hit. Emerson Drive has done a lot for Canadian country music and has come a long way on both sides of the border, something not many artists can say today.

They also gave us a taste of new music they will be releasing later this year. ‘My Kind of Crazy’ is destined to be another hit later this summer. As the crowd called them back on for an encore, the boys of E-Drive kicked into a cover of Kings of Leon‘s ‘Use Somebody’, which quickly turned into a version of The Rolling Stones‘ Sympathy for the Devil and then their version of ‘The Devil Went Down to Georgia’. A medley no one would have guessed, but turned to be absolute genius. Like any great band can do, they left us wanting more.

Emerson Drive will be doing several shows here in Canada this summer as they finish their next album. Check the tour section on their website on where you can catch the guys live next.

For more more information on Emerson Drive, check out: www.emersondrive.com

For more information on Brett Kissel, check out: www.brettkissel.com

For more information on the C2 Field House, check out: www.centennialcentre.ca