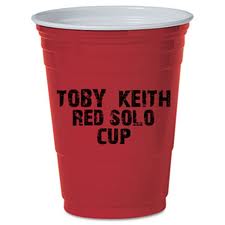 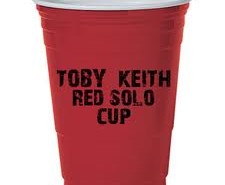 You know you have a hit on your hands when a couple of months after you release a song, the cast of TV’s Glee covers it.  And that’s what has happened with Toby Keith’s novelty song, Red Solo Cup, already #1 on iTunes and CMT.com.

Red Solo Cup is a song from Keith’s latest album, Clancy’s Tavern, and the only song on that album he didn’t co-write.  It was written by Brett Beavers, Jim Beavers, and Brad and Brett Warren (The Warren Brothers).  Toby told CMT it was the “stupidest song that I had ever heard in my life but also freakin’ awesome.”  The video has gone viral on the internet with more than 5 million views.  Here’s the unedited version.  It features cameos by The Warren Brothers, Larry Bird, Ted Nugent, Craig Ferguson, Sammy Hagar, Roger Clemens, Carrot Top, Eric Church, and others.

I really enjoy this tune because Keith doesn’t make it to be anything other than a fun, stupid ditty, and it sounds like he and the background singers are getting drunker as the song continues. Kind of reminds me of a Roger Miller tune meets Bob Dylan’s Rainy Day Women #12 & 35.  Much laughing and shouting, off-key singing, nice and sloppy, witty and funny.