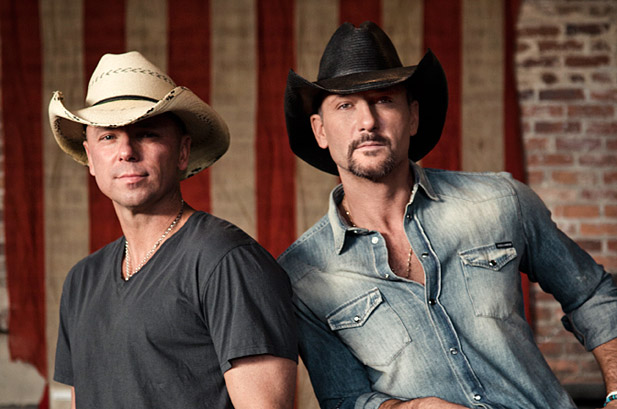 Is the McGraw & Chesney Rock Star tune a #1 song?

Did you catch Tim McGraw and Kenny Chesney‘s performance of their new duet ‘Feel Like a Rock Star’ during the ACM Awards Sunday night? Seems that the folks at country radio sure liked their performance, and the song.  In fact, ‘Feel Like A Rock Star’ has climbed to the top of the charts in the U.S. and is the most played country song right now.

The two superstars performed the song to kick start a big tour they are undertaking together in June, billed as the Brothers Of The Sun Tour. According to Billboard, after just one day of airplay (that would be April 2) the song had 979 plays, reaching an audience of 7.9 million listeners, making it the top song on the chart. However, things could change before the chart is published next Monday, April 9. One problem is the song isn’t very good.

I was watching and listening to the performance of the song at the ACM’s and thought Tim was off-key and that the song just trudged along.  Seemed to me like the two recorded the song, not because it was a great song, but because it could help them sell tickets. I wasn’t alone in my reaction.

One large-market country radio executive decried the duet as “horrid, and very disappointing,” adding that Chesney and McGraw’s “vocals are average and the lyrics are dull. I was sick of this song after the second listen. Very disappointing.”

KKBQ Houston OM/PD Johnny Chiang offers a slightly more enthusiastic take. “A solid song, if a bit formulaic. However, having two stars of that magnitude on the same project certainly helps.”

Superstar duets often get a great reaction out-of-the-box at radio.  However, that doesn’t necessarily guarantee chart-topping success on the Country Songs chart.  Other duets featuring country superstars have sometimes failed to reach the top of the charts. Chesney has fallen short of the mark with some prior collaborations.

He has charted four top 20 duets with co-lead solo artists but, perhaps surprisingly, only ‘When the Sun Goes Down,’ with Uncle Kracker in 2004, reached #1.  Chesney’s top 20 duets with two of the biggest acts in country music history each missed the top of the charts; 2008’s ‘Shiftwork,’ with George Strait went to #2, and ‘Every Other Weekend,’ with Reba McEntire, just #15. Chesney’s other top 20 duet, ‘I’m Alive,‘ with Dave Matthews, reached #6 in 2009.