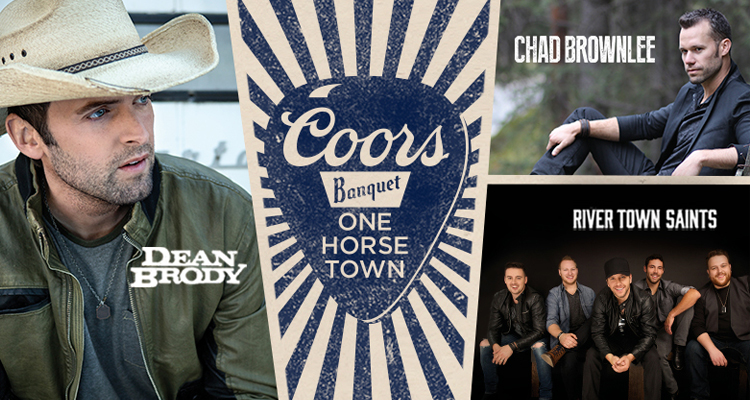 No scale is big enough to tell you how excited we are to be a part of the Coors Banquet One Horse Town contest … but if we have to give you a number 1452789 seems about right :). Says Chris Labelle of River Town Saints.

Coors Banquet will bring fans closer to this exciting country music experience by once again partnering with CMT. CMT will be live on location filming the One Horse Town concert experience and will use the footage to produce three TV concert specials to air in late 2016.

“Being from a small town in BC, I grew up having to drive to see my favourite artists, and only dreamt of having them perform in my hometown,” says Dean Brody, Canadian country artist from Jaffray, British Columbia, a town of 810 people. “This is why I couldn’t be more excited to bring a one-of-a-kind country music experience to a small town like the one I grew up in.”

Labelle told us, I personally have never been to any of the 6 finalists towns. I might write to the CEO of Molson Canada and ask him if we can just make all 6 winners. It would be awesome to play every town. Secretly I think the people of Alberta deserve a concert though… with everything that’s being going on with the wildfires Alberta needs a break and there’s no better way then have RTS, Chad Brownlee, and Dean Brody rock the town of Vermilion!

Canadians over the age of 19 are encouraged to head to Coorsbanquet.ca/oht to vote for their favourite of the top six towns. The town that receives the most votes by July 4, at 11:59 PM will be announced the winner of One Horse Town!

More information on the contest including contest rules and details can be found at http://coorsbanquet.ca/oht or follow Coors Banquet on: