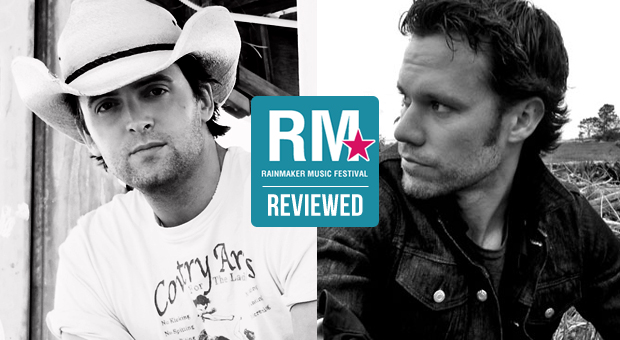 Rainmaker Reviewed: No Rain, All Sunshine

When you hear Rainmaker Music Fest, you normally think you’re going have a good, but somewhat wet time. Ironically, this year, the event brought nothing but sunshine, beautiful weather, and incredible performances. St. Albert, Alberta had it good on Saturday night.

The event kicked off with two local artists The Orchard and Katie Mission, both signed to hometown label Royalty Records. Mission was later invited on stage during Beverley Mahood‘s set to sing her hit from a few years back, ‘I Want a Man’. Mahood sang her hits including, ‘Rewrite History’ and new material from her upcoming album, which is sure to be a great record.

Chad Brownlee was also on the impressive Rainmaker bill. Ripping through his hits including ‘Carried Away’, ‘Day After You’, ‘Love Me or Leave Me’, he had the crowd singing along and loving every minute of it. Impressive for a guy who’s only been around for a couple of years. Perhaps the current single, ‘Smoke In the Rain’ was the stand out song of the night. The crowd was right into the “Hey, now…. Hey, now, someday you’re gonna wish that I was still here”, screaming and singing along with every word.  The middle of the set was impressive too. Chad travels with a talented band, including his female guitarist, Hayley, who has a single now at Canadian country radio titled ‘Feelin’ California’. Hayley performed her single and then took lead vocals on a cover of Golden Earring’s ‘Radar Love’. Brownlee then closed his show and went to sign autographs for eager fans.

Closing the night’s festivities was Dean Brody and his band, appropriately titled ‘The Brodeo’. Brody opened the show to an electric audience, already well warmed up from the other great acts, with ‘Roll That Barrel Out’. It was no secret how much this Alberta audience loves this guy, but also how much Brody loves Alberta. He attended NAIT (Northern Alberta School of Technology) after high school. The crowd sang along with the hits, including ‘Brothers’, ‘Trail In Life’, ‘Little Yellow Blanket’, and ‘Undone’. The two stand outs:  ‘Dirt Road Scholar’ and the show-closing #1 hit ‘Canadian Girls’. At times, it was hard to hear Brody, as the crowd as signing along at an incredible volume.

My guess is, even if the Rainmaker would have brought rain, the crowd still would have come out and loved these artists just as much.