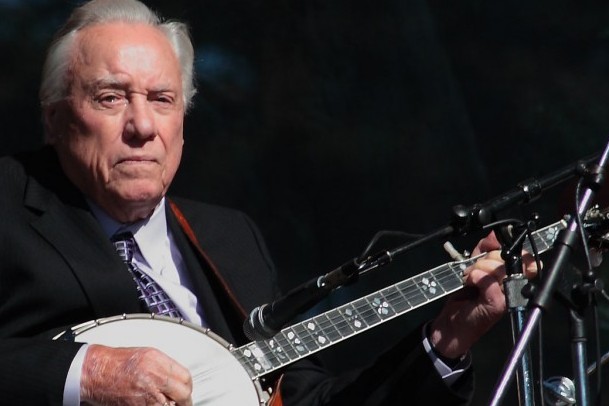 Country Music Hall of Famer Earl Scruggs has passed away.  Scruggs, 88, died Wednesday morning in Nashville of natural causes. Scruggs was a country music and bluegrass music legend.  He was also a musical innovator and originator who popularized a three-fingered, complex style of banjo playing that basically inspired all banjo players who came after him, and became a key part of what would become known as bluegrass music. The banjo became a magical instrument in Scruggs’ hands.

As a member of Bill Monroe’s Bluegrass Boys in the 40’s and then along with his musical partner Lester Flatt (as Flatt & Scruggs) in the 50’s & 60’s, Earl Scruggs’ banjo playing dominated bluegrass. But Scruggs wasn’t limited to one genre.  He was open-minded to playing with artists from other genres of music and other generations.  He was equally comfortable jamming with Bob Dylan, Elton John, BB King, Vince Gill, Marty Stuart, Ravi Shankar, and Dwight Yoakam.

“Earl Scruggs, the most important banjo player who ever lived, has passed on,” Steve Martin, actor/comedian and Grammy-winning banjo player, tweeted after news broke that Scruggs had died Wednesday morning of natural causes. The North Carolina native recorded more than thirty albums over his career.  Some of his classic songs are ‘Foggy Mountain Breakdown,’ ‘Salty Dog Blues,’ and, even if you are not a bluegrass fan there’s a very good chance you know his most famous composition, ‘The Ballad of Jed Clampett’, aka The Beverly Hillbillies TV show theme. He recorded it with Lester Flatt and singer Jerry Scoggins in 1962…

Scruggs won many awards and honours during his career, including the National Heritage Fellowship in 1989, the National Medal of the Arts in 1992, and the Grammy Lifetime Achievement Award in 2008. He was inducted into the Country Music Hall of Fame in 1985 and was an inaugural inductee into the International Bluegrass Hall of Honor in 1991.