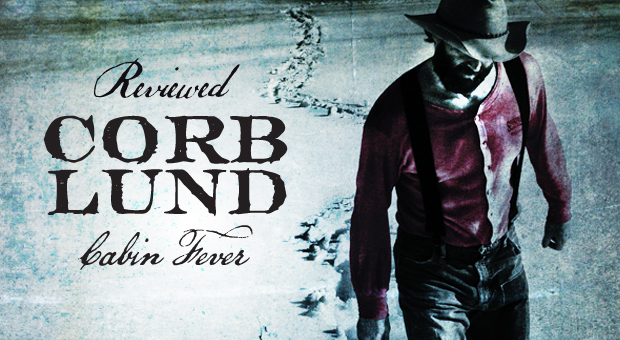 Diversity must be Corb Lund‘s middle name. Of course it isn’t, but after taking a listen to Cabin Fever it should at least be an honorary one.  If you think roots music is a relatively narrow sonic category, give this one a spin and it’s wide-ranging palette of sounds and stories will keep rotating in your noggin’ for a good long time.

Dropping internationally on August 14th, Lund’s seventh studio album and second US release under the venerable New West Records banner is boisterous, refreshingly loose and full of engaging curiosities. There is little chance anyone would know exactly what they would hear before hitting play on a song called “Priceless Antique Pistol Shoots Startled Owner.” Considering Lund’s catalog to date, an ’80s synth-pop approach could probably be ruled out but, then again, maybe not. What you will hear on Cabin Fever is some kick ass strum and thump, rollicking rockabilly, toe-tappin’ western swing, saloon-style honky tonk and some pretty decent yodelling. Lund and his Hurtin’ Albertans cover a lot of ground without ever sounding out of their element. It’s an experience-fuelled comfort that has built them a burgeoning fan base everywhere from one horse towns to big, bad cities on three continents.

Written largely during periods of seclusion at his self-built cabin about an hour outside Edmonton, the four-time Juno winner’s newest collection doesn’t come off as fostered by a  forlorn soul. A rich imagination, intriguing characters and the familiarity of favourite things were keeping Lund good company. Time spent in Las Vegas, New York and Austin also fed the album. The first single, “September”, deftly highlights the city versus country dichotomy through a cowboy’s high lonesome pleas for his lover to stay with him ’cause  “there ain’t nobody in New York City could need you half as bad.”

The first two songs on Cabin Fever kick things off to a dark, but high octane start. The apocalyptic, swamp-grass boogie of “Gettin’ Down on the Mountain” fits hand in dirty glove with the rowdy stomp-clap of “Dig Gravedigger Dig”. The latter’s infectious chant will certainly be heard for more than a few rows back at future shows. Then, the Good Book becomes good luck charm in the scruffy road story “Bible on the Dash”, a co-write and duet with Lund’s friend, Texan troubadour Hayes Carll. It’s wicked fun to ride along as a stolen Gideon’s gets our boys out of potential scrapes with the law. Cabin Fever continues to get its smile on with “Mein Deutsches Motorrad” and “Cows Around”, a revved up tribute to Lund’s favourite, vintage BMW motorcycles and a swinging sentiment about every bovine breed under the sun. Half way through Cabin Fever it might feel like you’ve taken a rambunctious trip around Lund’s whole captivating world, but don’t put away that scrapbook just yet.

After the album’s mid-point, Lund’s deep roots from a long line of Alberta ranchers and riders start to really show. “(You Ain’t a Cowboy) If You Ain’t Been Bucked Off” cannily presents taking a spill in the rodeo ring as metaphor to being romantically dumped. Suffering as a rite of passage ’cause “if you ain’t been bucked off and throw’d a few times, it don’t count for nothin’ when you make that last ride.” Later, romantic suffering is taken to the extreme in the somber “One Left in The Chamber”. The whiskey unabashedly flows in “Drink It Like You Mean It”. It flows even harder in the album closer, “Pour ‘Em Kinda Strong”, as Lund weaves his final tale of a nasty outlaw’s comeuppance after warning his bartender, “Well, I got a powerful thirst I come in here to try to slake. So, serve it up or try me if you must.” These are the Corb Lund songs you can count on to show a hearty respect for cowboy heritage with a spicy side of irreverence.

In the midst of this Western-flavoured section, Lund throws another diverse curve ball in the form of “The Gothest Girl I Can” with “the pale white, rockabilly tan.” In an album populated with dusty gems, this one shines with its own kind of brilliance.

With a lot of miles and music under their belts, it’s not surprising that Lund and his band mates (guitarist/multi-instrumentalist Grant Siemens, upright bass player Kurt Ciesla and drummer Brady Valgardson) decided to tuck themselves into an Edmonton studio to lay down the tracks for Cabin Fever live without overdubs. Great choice. The result has the immediacy of a live show paired with the relaxed know how of a group that’s been playing off each other’s cues for a long time.

Honoured as CCMA Roots Artist of the Year a whopping seven times in a row (2004-2010) and nominated again this year, Lund has built another level on to the craftsmanship and acclaim of 2009’s Losin’ Lately Gambler with Cabin Fever. If there’s one bit of this album’s wily wisdom to wholeheartedly endorse above all else it has to be, “Everything is better with some cows around.”…and a Corb Lund song or two handy, of course.

If you can’t wait until Tuesday, you can stream the new album at: