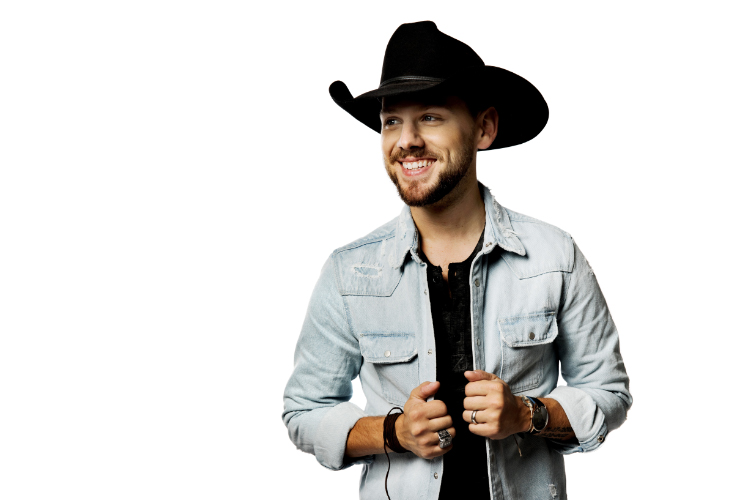 The new year, new decade and new music from Brett Kissel all came at once January 1, 2020. Brett’s highly anticipated release of his newest album, Now or Never is now available for country fans on all platforms. If you’re ready for a wild, crazy, country party song, check out his latest track She Drives Me Crazy. Kissel compares it to his single, Anthem on steroids! Check it out now, featured on our Top Country songs playlist.

Brett Kissel is constantly exploring new ideas, while never forgetting what he does best. It’s an approach that has propelled him to the top of Canadian country music, with two Gold certified albums, seven Gold singles and 14 top-10 radio hits to his credit. 2019 was his biggest year yet, winning the JUNO Award for Country Album of the Year and earning the Canadian Country Music Association’s Fans’ Choice Award, following a record-breaking 112-date tour that reached every single province and territory. The Canadian Press crowned him “The New King of Canadian Country.”

Although some artists might see these accomplishments as a cue to hit cruise control, for this proud husband and father of three, it’s only added fuel to his fire to give his audience more, and to expand his musical vision. That’s precisely what he’s done on Now Or Never, the first in a series of albums the pride of Flat Lake, Alberta, already has planned to release on an annual schedule. Now Or Never sets the tone of the new decade by delivering a dynamic mix of 21st Century country (“Drink About Me,” “She Drives Me Crazy”) and traditional heartstring tuggers (“I’m Not Him, I’m Not Her,” “Coffee With Her”) that are sure to find a place alongside Brett’s best-loved songs.

But listen carefully and it’s clear there’s a lot more going on. “I was in a really creative zone coming into making this record, and had written so many songs, that we decided to concentrate on the ones that showcased the diversity within my sound,” he says. “That’s been the case with every album I’ve made to a certain extent, but now we want to take the lessons we’ve learned from those records and really focus in. There’s traditional country, pop country, and acoustic country, which really plays into the eccentric style I have as an entertainer!””

Brett credits co-producer Jacob Durrett for covering a lot of the bases on Now Or Never and channeling the creative energy in exciting directions. With experience working with artists in nearly every genre ranging from country to hip hop, Durrett’s cutting edge studio techniques gelled perfectly with Brett’s goals.

“Jacob and I are the same age and have been buddies in Nashville for about eight years,” Brett explains. “We’ve both come up through the ranks together, and as I started planning Now Or Never it felt like the right time to collaborate with Jacob. He’s been able to put more of an international spin on my music, and bring out different nuances in my voice.”

That said, Brett didn’t leave his longtime producer Bart McKay out of the process, and his steady hand maintained the album’s overall cohesion. The seamless blend of the new and the familiar is the real strength of Now Or Never, exemplified by the first single “Drink About Me,” which rocketed to the top of Billboard’s Canadian Country chart soon after its release in autumn 2019. It’s set the stage for the arrival of the album’s more pop-friendly tracks, particularly “She Drives Me Crazy,” which places Brett squarely at the heart of country music’s current evolution.

“My family and I are just like every other music fan. We are all over the place. With the ways people listen to music these days, I don’t think anyone pays attention to genres like they used to,” he says. “One of the tracks from my last album We Were That Song, ‘Anthem,’ had a lot of pop elements in it, and it became my fastest single to go Gold, as well as becoming an instant favourite in our live show. So with that in the back of my head, I sat down with Karen Kosowski and Emma-Lee to write one day, and we started trading lines. ‘She Drives Me Crazy’ was finished in 45 minutes, and it was an amazing experience.”

To further prove Kissel’s ability to create, one of the more acoustic-bluegrass songs “Hummingbird” was written the same day as “She Drives Me Crazy”, which to Kissel, couldn’t be “more opposite”, as he describes.

At the same time, the inclusion of a song like “That’s Country Music” on Now Or Never is a testament to Brett’s heartfelt tribute to the stars who blazed the trail for him and broke boundaries in their own ways. In fact, the album’s closing song “Coffee With Her” stems directly from the incredible experience Brett had after writing a letter to Johnny Cash expressing his condolences following the death of June Carter in 2003. A few months later, on Sept. 12 as Brett prepared to play a show marking the release of his debut album, word came that Johnny had died. But in Brett’s mail that day was a letter from The Man In Black containing a picture and a scrawled note reading, ‘To Brett, Jesus first. Johnny Cash.’

It is that personal connection country music artists have always maintained with their audiences that Brett strives to carry on, even as he aims to reach more people through ambitious plans to expand his live show. Through his friendship with Garth Brooks, Brett has learned that the sky is the limit in that regard and he is single-minded in his pursuit to give his fans an unforgettable night each time he walks out on stage.

It’s also part of the reason why giving the album the title Now Or Never made a lot sense, especially as he ushers in a new era of Brett Kissel. “You only live once,” says Brett. “Society and our culture today lives in a headspace where experiences and crossing things off a bucket list have more value than they ever did before. I too, am very much a part of this mindset. Every song leads back to that thought, whether it’s in the lyrics I chose to sing, or the way I decided to produce the song. There are songs on this project I didn’t have the confidence to record in previous years. But it’s ‘Now Or Never,’ and I’m not afraid anymore. No two songs are the same. Every song has a life.”

At its core, country music is about storytelling. Brett Kissel will always be a great country artist because he is a great storyteller. Now Or Never opens a new chapter in his personal narrative, one that shows that as country music’s boundaries continue to be pushed, Brett will be at the forefront. The young country star, not quite 30 years old, has a passion and hunger like never before.

“When people dive into the eight songs on this album, I want them to hear exactly who I am,” he says. “When you’re making music, it’s easy to get lost in thinking about what everyone expects from you. But the real magic happens when you create something they like, and you really like it too.”

Top Country’s Pick of the Week: She Drives Me Crazy by Brett Kissel now added to the official Top Country Songs playlist.