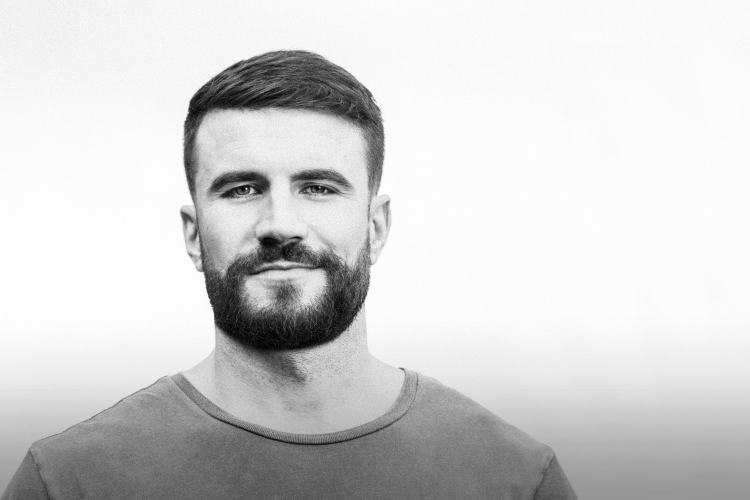 “When I think of ‘kinfolks,’ when I think of that phrase,” says Hunt, “I think of my family, but also I think of my people back home – beyond family. It’s my buddies who’ve been a part of my story from the beginning. I’ve made a lot of new friends and met a lot of new people who are important to me since I’ve moved away, but that core group is still my core group. It’s like that old saying, ‘you can’t make old friends.’” Hunt leans on that sentiment, exemplifying the importance of bringing a new relationship into the mix and comfortability of home.

Hailing from rural Cedartown, Georgia, Sam Hunt is quickly establishing a name for himself and becoming one of Nashville’s most talked about young talents.

Hunt has been writing songs and playing music since his days as quarterback at the University of Alabama Birmingham.  Following graduation, Hunt made the move to Music City to pursue songwriting full-time.

Shortly after settling into the Nashville scene, Hunt was signed to a publishing deal and started working with some of the top writers in the business.  Hunt began to develop his craft and quickly gained recognition as a gifted singer-songwriter.

Since moving to Nashville, Hunt has garnered cuts with some of country music’s biggest stars including Kenny Chesney’s No. 1 smash “Come Over,” Billy Currington’s latest “We Are Tonight,” and Keith Urban’s “Cop Car.”

Hunt’s own eclectic style owes its roots to country music with influences in pop, folk and R&B music.  Sam has been winning audiences over throughout the southeast in recent years with his soulful sound.

Between tour dates, Hunt is continuing to write and record songs for his upcoming debut album due out in 2020.

Sam Hunt’s GRAMMY-nominated, Triple-Platinum-selling debut album, Montevallo (MCA Nashville), topped the Billboard Country Albums Chart in its first week. It remains the best-selling debut album for a country artist since 2011. Since the Montevallo’s 2014 release, Hunt has accumulated over 6.85 billion global streams and has earned 22 million RIAA certified units. The album produced four No. 1 singles and five Platinum and Multi-Platinum-selling hits including “Leave the Night On,” “House Party,” “Take Your Time,” “Break Up In A Small Town” and “Make You Miss Me.” Hunt’s three-week No. 1, 6x Platinum-selling, GRAMMY-nominated smash, “Body Like A Back Road” shot to No. 1 on the Billboard Hot Country Songs chart where it remained for an unprecedented 27 consecutive weeks, shattering the record for most weeks atop the nearly 59-year-old chart. Written by Hunt, Zach Crowell, Shane McAnally and Josh Osborne, “Body Like A Back Road” was the No. 1 most-streamed and No. 1 most-downloaded country song of 2017, and the No. 4 most-downloaded and Top 10 most-streamed all genre song of 2017.