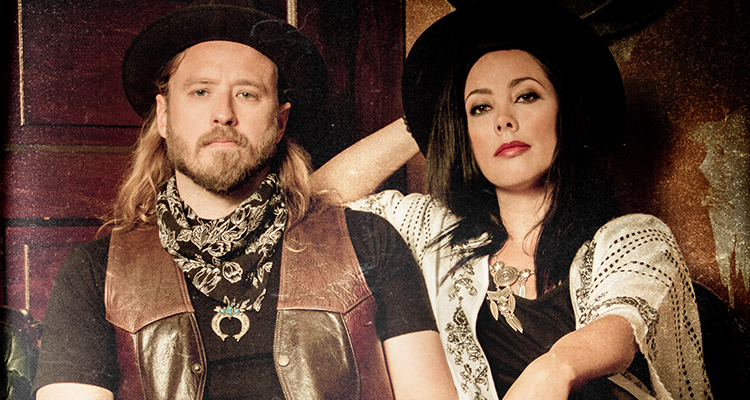 CCMA Discovery group and gritty breakout duo, Sons of Daughters have been busy writing and collaborating with some of the biggest names in country music, and playing some of the best venues possible in Nashville (iconic Blue Bird Café, The Listening Room, and Nashville’s favourite Monday night party, Whiskey Jam) over the course of several years. All roads lead to their first-ever release, since signing with RGK Entertainment, with the digital release of “Can’t Find Love in a Bar” out across all digital platforms today! You could win 2 tickets to see Sons of Daughters at Boots and Hearts on Aug 12 – enter below and get to know Sons of Daughters!

Sons of Daughters are a modern, gritty, country duo comprised of Jimmy Thow and Chrystal Leigh, hailing from Vancouver, BC, now based in Nashville, Tennessee. They recently recorded 3 tracks with Grammy and CMA nominated producer Brad Hill (Brothers Osborne, Maren Morris). Their first digital single, “Can’t Find Love in a Bar”, features writing credits from the duo, alongside Jennifer Kennard, as well as a production credit from Thow. According to Chrystal Leigh, the song was inspired by “our own individual experiences with falling in love, heartbreak and getting back on your feet.”

Top 3 Things You Need To Know About Sons of Daughters

1. Chrystal & Jimmy were invited to a private dinner party with AC/DC and were asked to sing the Canadian anthem for Brian Johnson.

3. Chrystal & Jimmy have lived in Nashville for the last two years. You can catch them playing songwriter rounds with some of country’s biggest songwriters at the famous Bluebird Cafe and The Listening Room.

Near the end of July, a second single will drop, titled “Ain’t Gonna Be Lonely Long”, followed by “What If We Stay” in August. Early this fall, the duo will have their first single released to Canadian Country radio.

Sons of Daughters are committed to carving their own unique sound in the modern country scene through captivating vocal harmonies, swampy guitar riffs and catchy lyrics, and the industry is already rooting for their continued success.

Fresh off of playing CMA Fest in Nashville and Bub City in Chicago, they can also be found on the festival circuit south of the boarder, performing at several high profile shows, including Boots & Hearts (ON) and Cavendish Beach Music Festival (PEI).