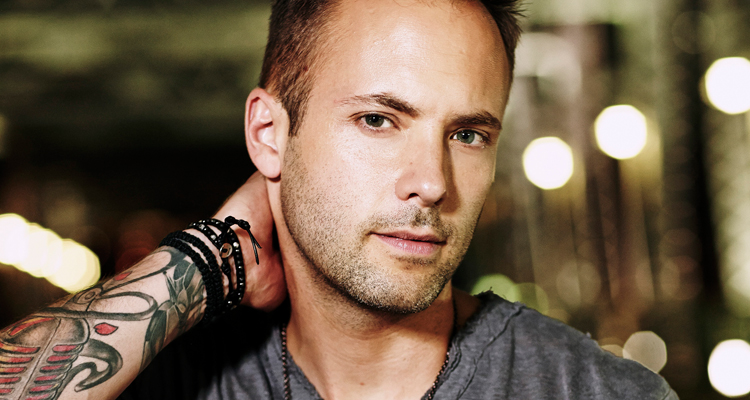 What is it like being a dad as a touring musician?

It’s tough. I have a 7-to-10-days sort of rule for being away. It has been really tough to do what we’re doing over the past couple of months—having to squeeze in U.S. radio appearances—so that rule kind of changed this summer. But normally, we like to poke our heads in for a few days every week to 10 days.

Do you have any advice for new dads who are on the road?

It’s very, very important to have some facetime. My wife sends lots of video clips. It’s nice to be able to see what’s going on. 
How does it feel to be at the top of the Canadian country music industry?[Laughs] I don’t feel that way. I’m just doing my thing and I’m really happy where I am. Every year it gets bigger and bigger. The fans are great. It’s crazy to think how far things have come from only a few years ago. I’m having to cut singles out of the set!

Which of your songs means the most to you?

Somebody Somewhere. It kind of blew the doors down for me, so it’ll always have a special place. Jump Right In is another one. I like how it translates live. Cheap Seats and Lifted have been big favourites as well.

So, you signed a new record deal with Blaster Records/Big Loud Mountain…

I’ve had a relationship with them for a while, and they’ve been working on the american leg [of the tour] and doing production. We were trying to find the right partner, and when Blaster came knocking on the door we loved the vision they saw for us. They’re spending money and opening doors for us, which is great. 

Tell us about your own label, SteelHead Music, and how you signed new artists ‘Petric’.

We knew we were going to start a label, so we put out a few feelers and asked people we trusted if they had any artist suggestions. Our radio promoter suggested Petric, so last year at the CCMAs we asked them come up to our hotel room and play for us acoustically. I heard their recorded music and wanted to see if they could pull it off live. I was blown away with how amazing they were. [Lead singer] Jason’s voice was so good live. I’m really excited about where this is going; there is so much potential.

What’s the biggest difference between being in your old rock band Default and being Dallas Smith?

I’m having so much more fun now. I feel way more at home musically than I ever did in the past. We’re all still great friends, but all those years selling those records and touring with Default was almost like a warm up for something bigger. We had a pretty successful career, so it’s kind of weird to look back and see it as a warm up, but I just feel so much more at home. I’m not trying to portray the image of a group. It’s just me. I’m just being myself. I do what I want to do and present myself the way I am. There is just much more freedom. Not being able to hide behind the band name also puts more pressure on me to improve as an artist.

Where do you see yourself in 5 years?

Hopefully still doing what I do now: making records on my terms and putting out music I want to put out. Hopefully people are still into it. Hopefully I can make some noise in the US and bring my Canadian sound down there. Knock down some of the US walls that exist for Canadian artists.

What is your pre-performance ritual?

We made a general rule as a band to get together beforehand, play music, have a pre-show drink and hang out. You have to get your head in the game.

What do you usually play during this hang-out?

Usually Bon Jovi, or some Audioslave.

What is something that no one knows about you?

I’m a huge Call of Duty nerd. I’m not quite at the level of playing it on the road but that might be a reality one day.