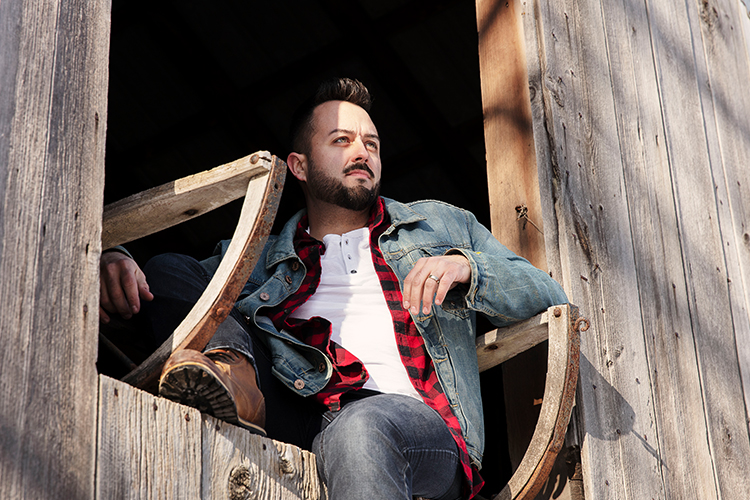 Revolution Pt. 1 showcases a new elevated style for Jason Benoit, blending modern country melodies with the familiar guitar picking and harmonies that define the country genre. From high-energy country anthems such as ‘Saturday’s For The Girls’ and ‘Two Wrongs’ to heart swelling ballads like ‘When We Know’ and ‘Endless Love,’ Benoit has created a 7-track collection with songwriting credits from some of country’s biggest heavy hitters.

Jason’s Top 10 hit ‘Gone Long Gone’ reached certified GOLD status, he was a Top 3 finalist in SiriusXM’s 2018 Top of the Country competition, and toured across the country hitting some of the biggest festival stages such as Cavendish Beach Music Festival, Boots & Hearts, the Calgary Stampede, and CCMA Fan Village. Hot off the road from supporting The Washboard Union across Ontario in October, we had the opportunity to ask Jason a few questions about his new release.

TC: Why did you chose the title “Revolution”?

BENOIT: It was originally “Evolution Part 1” because I felt like this album was an evolution of my writing, style, and me as an artist. But due to an autocorrect error in an email from my label, “Revolution Part 1” was born! I felt the title “Revolution Part 1” incorporated what “Evolution” meant, but also took it to another level, incorporating my need for individuality and the importance of being true to myself and the music I love. Also “Revolution” ties into the spinning of the old vinyl records that I love… there are many layers to the meaning of this title.

TC: Tell us about each track on ‘Revolution Pt. 1’

1. I Wont Go – I actually wrote this one in Nashville, TN in between writing sessions one day. It’s an anthem for anyone who had to fight to be with the one they love.

2. Forget to Forget – This song was written by JT Harding, among others, in Nashville who wrote hits for Blake Shelton, Keith Urban, and Dierks Bently. Although it was my first time recording songs written by other writers, I jumped at the opportunity. The first time I heard it I loved it!

3. Saturdays for the Girls – This one was also written by JT Harding and his team of writers. When I told him I loved “Forget to Forget” so much he said “well, I have another song you might like that I’ve been holding onto”, and he sent me this one. Once again, I was so impressed and immediately knew it should be part of the album.

4. Two Wrongs – I wrote this one with a long time friend, Gerry Foote, in PEI one summer while I was there to perform at Cavendish Beach Music Fest. There may have been a bottle of Tequila and a bottle of Fireball involved in the writing of this one, haha.

5. Slow Hand (feat. Leah Daniels) – I grew up singing and listening to classic country music. Slow Hand was initially released by the Pointer Sisters but was released a year later by Conway Twitty. His version is the one I was always familiar with. When I had the opportunity to release a throwback song, I decided to go with this one because I thought it still had a modern vibe that new and old country fans would love alike. And then with the amazing vocals of Leah Daniel’s, she added a new twist and vibe and I think it works incredibly well as a duet.

6. Endless Love – I actually wrote this one when I was 19 years old, 16 years ago! I always loved it. I was in Nashville working on the songs for this EP and I dug this one out, reworked it a little, and this was the result. I’m so happy it finally got released on this EP.

7. When We Know – I was always a fan of 50/60s music. Even though I was raised mainly on Country Music, amazing 50s/60s acts such as The Beach Boys, The Beatles, and Ray Charles also made a big impact on me. I sat down to write a song that would blend that great 50s/60s feeling with a modern country flair and this was the result. It’s quickly becoming a fan favorite.

TC: What are some of your influences for this collection of songs?

TC: Most Memorable Moment from the past Year?

BENOIT: There’s a tie actually! The first is opening for Old Dominion for 3 dates in May of this year! My first stadium tour opening for an American act! And the second is getting my first gold single for Gone Long Gone! As an independent artist this truly meant the world to me!

TC: What is one thing you have learned about Canadian Country Music and a piece of advice?

BENOIT: One thing I’ve learned is the Canadian Country Music Industry is it’s like one big family. The country lifestyle is down to earth and laid back and that definitely translates to the industry as well. Best to spend a few months back at mama’s before you try it out, she’ll set ya on the right path!
One piece of advice is to be persistent. It can take years of hard work and patience to become an overnight success.

TC: 5 Canadian Country Songs that are on your playlist right now

TC: 3 fun facts about your music video for Slow Hand with Leah Daniels

BENOIT: It was produced by Leah’s boyfriend Tim Deegan. It was recorded at Leah’s grandma’s place in Ontario. Her grandma makes amazing cookies. The sun was actually going down when we recorded the “sun coming up” part of the song.

Check out the Top Country Charts this week here or on Spotify.