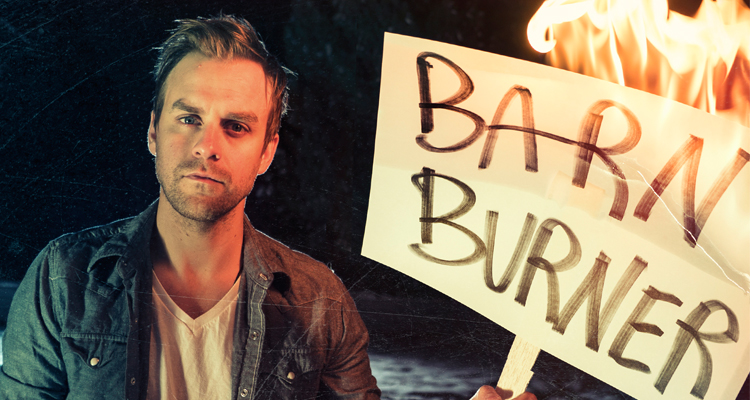 DAN DAVIDSON is back.

The singer of the hit song Found is back with “a real barn burner”. In the summer of 2016, Dan Davidson’s single ‘Found’ (co-written with Clayton Bellamy) reached #1 on the Canadian Single Sales chart, peaked at #16 on the Mediabase radio charts, and the infamously amusing $500 music video, seen below, reached #19 on CMT. A tough feat for a fully independent artist to accomplish.

Today, he’s back with a Top Country EXCLUSIVE PRE-STREAM of his brand new single ‘Barn Burner’.

The song was co-written with Clayton Bellamy. We had great creative chemistry with Found; so between that and the monster talent that is Jeff Dalziel (the song’s producer – who also produced Found) I figure… why fix it if it ain’t broke? It’s a tall order to duplicate the indie success that Found had for me, so I was waiting for a song to just hit me the same way Found did.

Born and raised in a town outside of Edmonton, Alberta, Dan Davidson talks about the inspiration for this boot stompin’ tune.

The song really came at me from out of nowhere (as some of the best ones seem to do). I was at the park with my baby girls and just started singing that first line of the chorus in my head. The line was inspired by watching my pal Brett Kissel play a show and he said something to the crowd to the effect of “This next tune is a real barn burner!”… and something about that expression stuck with me. I started thinking about all the fun times you have growing up trying to find bush parties (especially if you grew up in a small town) and really living in those carefree moments for as long as I could. When I was in high school smart phones weren’t a thing (I’m old.) so we would all hang around the skatepark, the convenience store, or one of the local hangouts until we’d run into someone who “knew where the party was”. Then we’d all jump in a car and inevitably head out to someones acreage or some bush party somewhere. I think everyone remembers how awesome those days were, and so Clayton and I just want to capture that a bit with the writing.

Dan worked with some of Canada’s most notable musicians on the production of Barn Burner.

I was lucky enough to have a ton of talented players on this one. I had Tyler Volrath (Brett Kissel) on fiddle, Justin Kudding (Brett Kissel) on bass, Jeff Dalziel (producer for Washboard Union) on drums/mando, Pete Lesperence (The Stellas) on guitar/dobro/banjo, and Ryan Eligh (session guy) on guitar and I also played guitar on the track.

Find a little two-step honey, get your dancing boots ready, and listen to ‘Barn Burner’ right here before it hits Canadian country radio on Monday, October 24th! Be sure to request it at your local country radio station. Available on iTunes Tuesday, October 25th!