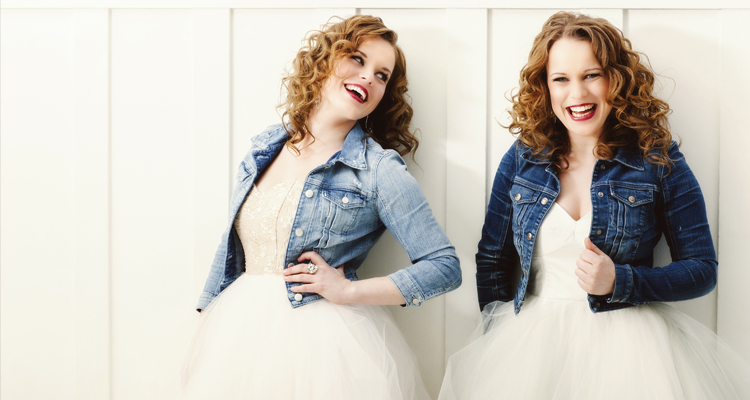 This month’s Fresh Find duo and country music’s newest sweethearts, Twin Kennedy, are getting ready to release their debut LP It’s A Love Thing on April 7th and we got the chance to chat with them all about it!

You might recognize the ladies of Twin Kennedy from their sibling performances throughout British Columbia as Carli and Juli Kennedy. Now, re-branded as Twin Kennedy, the girls are ready to take on the Canadian country music scene.

Their debut single “It’s A Love Thing” was released earlier this year and the girls then spent two months travelling coast to coast, performing acoustic shows and visiting radio stations to spread the love – and their music – across the country. With the release of their new LP (produced by George Canyon) quickly approaching, Twin Kennedy is getting ready to hit the road again with a full band behind them.

Read our Q & A with them below and then check out the video “Introducing Twin Kennedy”!

Q: What made you choose to pursue a career in country music?

A:  Country music has always been our true love. We have been singing and listening to country since we were kids, and we have always wanted to be performers. We spent many years studying various styles of music, completing our Bachelors Degrees in classical music performance, singing in jazz ensembles and playing in symphonies, but country music has always been our home.

Q: Who are some of your biggest musical influences?

A: In terms of Canadian country music, we have had some amazing influences from Shania Twain, Beverley Mahood and Patricia Conroy to Leahy and The Rankins. We grew up listening to George Canyon and loving his voice and his songwriting, so we were so excited to have the opportunity to work with him on our new album.

Q: Can you tell us a bit about your debut LP It’s A Love Thing?

A: It’s a Love Thing is exactly as it sounds – an album from the heart! We co-wrote all of the songs on the record, and we have opened up about our own journeys of love – happiness, heartbreak, adventure, confidence and uncertainty, it’s all there. We hope people will relate to all of these feelings and themes on the record.

Q: What has been one of the most memorable moments of your career so far?

A: We grew up playing in a family band with our Dad and younger sister. We performed at all kinds of community events in our hometown of Powell River, and one of the biggest gigs we ever played was the RCMP Musical Ride. It was in the hockey arena back home so we like to think of it as our first stadium gig! That definitely stands out in our early memories…

We had the opportunity to play overseas for the first time last September at the Live at Heart Festival in Orebro, Sweden. Connecting with audiences (sometimes those who didn’t even speak English!) was a really amazing experience.

As for now, recording our new album with George Canyon and Graham Sharkey is fresh on our mind and absolutely one of the most exciting moments of our career so far. We lived at the studio for a month last year while we made the album, living and breathing music – it was definitely a dream come true.

Q: What else have you got coming up this summer that fans can look forward to?

A: We have a lot of performances coming up that we are really excited about! We’ll be in Toronto for an official showcase at Canadian Music Week this May, and we have just been announced as an opener for Big & Rich on the Mainstage at the Rockin’ River Music Fest in Merritt, BC this summer!