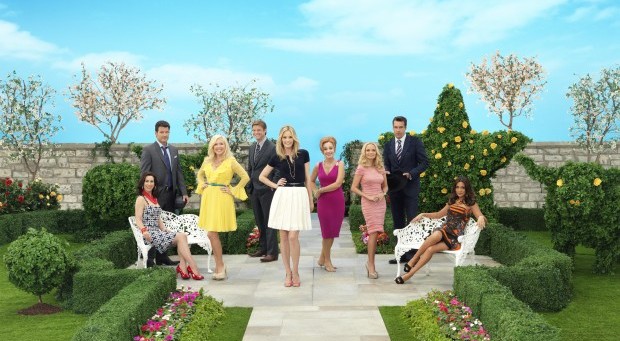 GCB is a tongue-in-cheek comedy worth watching

Texas women have always lived by the motto, “The higher the hair, the closer to God.”  GCB, ABC/CTV’s weekly Sunday night romp through Dallas is full of big hair, big money, and big drama.  This tongue-in-cheek comedy has had me rolling on the floor laughing at its ridiculous antics since the very first episode.  The five central characters are the epitome of “frenemies” and the relationships between the women hang in the balance each week, leaving us coming back for more.

The series premiered in early March of this year and introduced us to Amanda Vaughn (played by Leslie Bibb), a former high school cheerleader and ultimate mean girl who has returned home to Texas from California after her husband embezzled millions of dollars and then found his fate in an unfortunate roadside incident as he was making his escape.  Amanda is met by four of her archrivals from high school who have gotten older, but seem to be no less mature than they were in their high school days.  We’ve seen them throw mud on one another (both figuratively and literally), shoot each other (albeit accidentally), spy on one another, and sabotage each other.  These women are conniving and scheming and more exciting to watch than a three-ring circus!

Kristen Chenoweth is perfectly cast as neighborhood holy-roller Carlene Cockburn, who has a strained past with Amanda.  Rounding out the core group of women are business mogul Cricket Caruth-Reilly (played by Miriam Shor), real estate agent Heather Cruz  (Marisol Nichols) and housewife Sharon Peacham (Jennifer Aspen).   Even the leading men in the show are worth watching.  All handsome and rugged, the even-keeled guys do a great job of balancing the drama created by the women.

Of all of the shows characters, the best of the bunch is veteran comedic actress Annie Potts (Ghostbusters, Designing Women) as matriarch Gigi Stopper.  The sharp-tongued redhead steals every scene she is in and I certainly hope her role expands in the future.

Though much of the finale was just a slow buildup for next season, the show ended with a completely unexpected cliffhanger that has us all waiting anxiously for Season Two!

I’m not sure how much of an audience the show has captured across North America, but it has certainly captured our attention at TopCountry.ca!  Catch this one while you can online at the ABC website or wait until June for the season to be released on DVD.  Either way, this is one you can’t miss!

So is it true that everything is bigger in Texas?  If GCB is any indication, you bet your bottom dollar it is!

Check out the trailer for season one here.