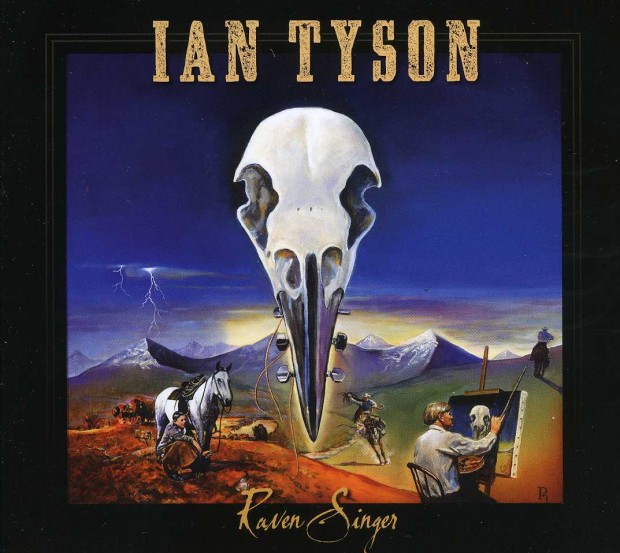 Ian Tyson adds to his legacy with Raven Singer

Raspy and rough-hewn, weathered and wise, Ian Tyson‘s voice on Raven Singer is a welcome reminder of what a constant, stalwart presence this iconic singer/songwriter has been on our musical landscape since the 1960s. Four years since the release of his last album, one of Canada’s most enduring, legendary roots country artists is back with a stirring collection of raw- edged, but touchingly told ruminations on western life and beyond. Tyson’s 14th collection for Stony Plain Records shows the 78-year-old in resilient form, spinning his tales of open country, big skies, adventure, romance, and the characters that populate it all.

Tyson’s resiliency is underlined on this album, his second since recovering from the effects of a potentially career-derailing vocal injury and debilitating virus in 2006 that left his voice gravely and coarse. Rather than call it a day, the Juno Hall of Famer and Canadian Country Music Hall of Honour member adapted his songs to his new voice and carried right on keeping audiences as rapt as ever. On Raven Singer, Tyson shows he’s gained back even more comfort vocally, moving from hushed contemplation to more urgent moments with relative ease.

All ten songs on Raven Singer were written over the past three years except for one and they span many miles of territory and experience. Tyson’s traveling pen and guitar take us from windswept Texas to the wild waters of the ‘Rio Colorado’, and as far afield as ‘Under African Skies’ and ‘Back to Baja’. Each destination is distinctly drawn with vivid recollections of people and places, sometimes tinged with longing and loneliness. Tyson also turns that roving eye inward. ‘Blueberry Susan’ travels a more personal road back to his earliest musical days and the first guitarist he heard that launched him into learning his own craft. In a little over three and half minutes, we get a glimpse into who and what gave the writer of the cherished classic ‘Four Strong Winds‘, among many others, his creative start.

Two songs on Raven Singer about western life also provide two more bright moments. Kicking off the album, ‘Charles Goodnight’s Grave’ is a fitting and somewhat somber tip of the hat to legendary Texas rancher Charles Goodnight, inventor of the chuck wagon, and his cattle driving partner Oliver Loving. The two founded the Goodnight Loving Trail, which began to be used in cattle drives in the late 1860s through Texas, New Mexico, Colorado and Wyoming. Later on the album, Tyson proudly tributes a “one of a kind” ‘Saddle Bronc Girl’ who “better hold on tight, get tapped off just right.” When it comes to the cowboy way of life and writing about it with knowledge and reverence, everyone knows Tyson walks the walk. It’s evidenced most recently by the choice to make Tyson the Parade Marshall for the 100th anniversary of the Calgary Stampede.

Ian Tyson, a Member of the Order of Canada since 1994, is truly one of our country’s cultural treasures and Raven Singer adds another rich and satisfying chapter to his ongoing story. There’s a genuine comfort in knowing that one of our most legendary storytellers still has plenty of them of tell.