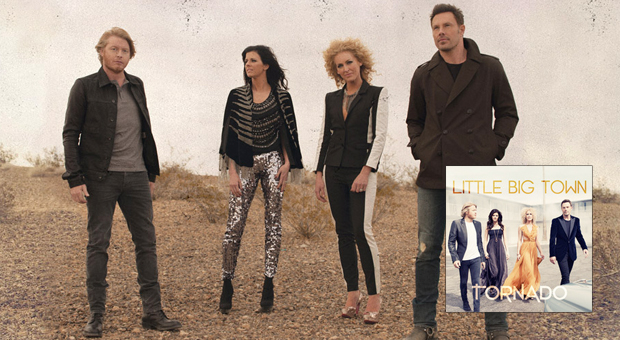 Little Big Town’s newest album Tornado officially makes them the most underrated vocal group in country music. Four-part harmony, killer production, and southern charm make this record on that you need in your collection. After three records of having Wayne Kirkpatrick in the producer’s chair, LBT made the switch over to Jay Joyce (Eric Church) for this project. The result: pure magic.

The lead single ‘Pontoon’ has been the song of the summer and has gone #1 in both Canada and the United States – a first for LBT (hard to believe after three previous records and countless singles). A well deserved achievement for this talented four-some.

Several times throughout the record, LBT collaborates with songwriter Natalie Hemby (‘White Liar’ by Miranda Lambert, ‘Play On’ by Carrie Underwood), who has writing credit on 5 of the 11 tracks including ‘Pontoon’. ‘Can’t Go Back’ tells the story of a heart broke woman who knows that you can’t undo the mistakes of your life. The lead vocals of Kimberley Schlapman sing, “No, I don’t want to be a witness to the end of you and me”. Their harmonies in this song will leave goosebumps on your skin; haunting.

The title track ‘Tornado’, another Hemby co-write, has a completely different vibe from any of the other songs on the record. It features the lead vocals from Karen Fairchild, snappy beats, and tells the story of a scorned woman who want to turn her house and life upside down. ‘Front Porch Thing’ features lead vocals from Phillip Sweet and is a newer version of their first hit ‘Boondocks’, but still a great southern tale. It’s sure to be a crowd favourite at live LBT shows.

‘Your Side of the Bed’ featured lead vocals from the married couple in the group, Jimi Westbrook and Fairchild. A far cry from their actual life I’m sure, the song asks the question, “Are you sleeping with your won regret, on your side of the bed?”
Written by the Warren Brothers (Brad and Brett), Joyce, Westbrook, Fairchild, and Schlapman, the lyrics and harmonies make this one of the most well-interpreted, painful duets I’ve heard in a long time.

Perhaps the gem on this album though is ‘Sober’, written by Liz Rose, Hillary Lindsey, and Lori McKenna. Once again featuring the lead vocals of Schlapman, it explains the power of love and allowing yourself to just let go and let someone love you. The melody is infectious and will have you humming along, even long after the song comes to an end. By far, my favourite song on the record.

Little Big Town has raised the bar and have reached the next stage in their career. Their talent as writers, musicians, and singers is showcased on this album like no album they’ve done before. More than anything, they have showed their diversity and interpretation of country music in all its forms and emotions. Get this record for your collection.