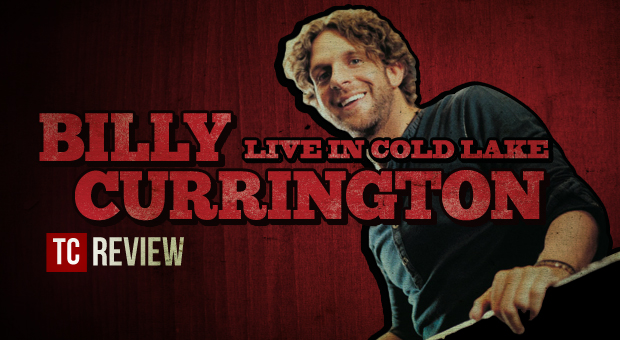 Last Friday night, Cold Lake got a taste of just how country boys roll when Billy Currington made a stop in their city.

Opening act Josh Macumber, who now calls Cold Lake home, had the hometown crowd on their feet throughout his performance. The Nova Scotia native is best know for his singles ‘That Road Won’t Lead You There’, ‘215’, and the crowd favourite, ‘All Hat, No Cowboy’ – all off his debut album Josh Macumber Was Here. What really showed the crowd his talent, a stellar cover of Eric Church’s current smash ‘Springsteen’. Macumber also called another hometown talent to the stage, Tiffany Dowhan to sing his hit ‘Tomorrow’ with him. Safe to say we will be seeing a lot more of this guy.

Billy Currington hit the stage with his smash ‘That’s How Country Boys Roll’ and kept the crowd going for well over 90 minutes, punching out hit after hit. What’s even more impressive is that Currington’s band works just as hard as him to keep the crowd engaged. The singer belted out tunes such as ‘People Are Crazy’, ‘Don’t’,

‘Pretty Good At Drinkin’ Beer’, and ‘Must Be Doin’ Something Right’. For his latest single ‘Like My Dog’ he brought up Paco, his trusted best friend, a chocolate lab.

By the end of his set, he led the crowd into a couple of classics, including Hank Williams, Jr.’s ‘Family Tradition’ and Stevie Wonder’s ‘Superstitious’. Impressive.

Billy Currington is one of the most underrated vocalists and entertainers in the genre of country music. He has the ability to keep a crowd engaged for 90 minutes and leave them still wanting more; the mark of a true, great entertainer.