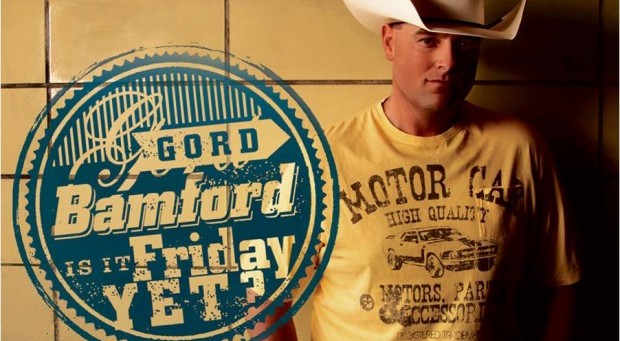 Gord Bamford – ‘Is It Friday Yet?’

Gord Bamford
Is It Friday Yet? – Sony Music Canada

He’s Canada’s stalwart torchbearer for straight-ahead, blue-collar country. After five albums, Gord Bamford has grown into an artist you can rely on for a meaty, honest to goodness, country-to-the-core collection of songs. Album by album since 2001’s God’s Green Earth, Bamford has steadily raised his caché to where he can be comfortably mentioned among the top tier of Canadian male country artists like Paul Brandt, Johnny Reid and more recently, Dean Brody. In so doing, he landed major label backing from Sony Music Canada for his fifth release, Is It Friday Yet?.

Is It Friday Yet? answers its own question in the affirmative, with a rousing set of saloon stompers peppered with moments of heart wrenching loss, all co-written by Bamford. The title track and first Top Ten single is another toe-tappin’, all-Gord ditty that follows in the two-steps of ‘Stayed ‘Til Two’ or ‘Put Some Alcohol On It.’ The paired up guitar and fiddle riff that punctuates the lead track ‘Must Be a Woman’ makes an emphatic announcement that Bamford has arrived to deliver the honky tonk goods. He pays heartfelt, up-tempo tribute to the ones he loves on ‘She Makes Me Look Good’ and ‘On My Best Days.’  ‘Disappearing Tail Lights,’ ‘Nothing Hurts As Bad As A Broken Heart,’ and ‘Now That You’re Gone’ – the latter featuring a co-writing credit with CMT and Canadian country radio personality Casey Clarke – are all bleeding-heart-on-sleeve ballads that add the right amount of pathos to the party.

The stand out track is the stirring and mournful ‘Leaning On A Lonesome Song.’  With weary heartache edging into his voice, the call-response verses have Bamford sounding like he’s singing out over the lip of a canyon where he’s the loneliest soul for miles. As he pleads in the chorus, “Pour me something strong. I’m barely hanging on. Leaning on a lonesome song,” you want to somehow prop up this broken down soul. As a single, ‘Leaning On A Lonesome Song’ should do more than its fair share for bolstering Bamford’s chart success.

The album isn’t without a few missteps however. ‘Farm Girl Strong’ is an underwhelming chugger with some been-there-overdone-that sentiments. “She likes an ice cold beer and a three chord song…Her jeans are tight and her legs are long. Man, she’s a looker. She’s farm girl strong.” Additionally, the retro swing of ‘You Make It Better’ feels like a whimsical, out-of-step departure from the rest of the album’s straightforward, no nonsense approach.

For Is It Friday Yet?, Bamford teams up for a fourth time at the production helm with highly-accomplished Nashville songwriter/producer Byron Hill (Kathy Mattea, Gary Allan). The result is crisp and snappy, with tasteful colourings of pedal steel, mandolin and fiddle. Hill and Bamford shared CCMA Producer of the Year Awards in 2008 and 2010 for Honkytonks and Heartaches and Day Job. Is It Friday Yet? could likely prove to be another winning combination.

Nothing worth being proud of comes without at least a little pain, as Bamford can attest after undergoing gall bladder surgery just before the release of the new album and the start of a cross Canada tour. He was back in fighting form in no time, however, to delight fans with the steadfast brand of sure-bet country he’s crafted for over a decade. Is It Friday Yet? is the latest proof that, for pure country pleasure, you can let it all ride on Bamford.