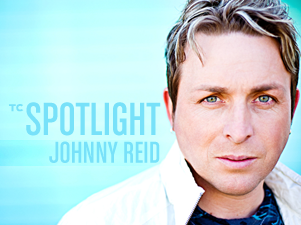 Johnny Reid is in the TC Spotlight

Johnny Reid is in the Top Country spotlight. The Scottish-born, Canadian-raised country soul singer is also a songwriter, entertainer, producer, and family man (he and his wife Jennifer have four children).  Johnny is gearing up to take his music coast-to-coast this spring and has just release his seventh album, Fire It Up.

Johnny Reid moved to Canada in 1988 when he was 13 years old. His father, a diesel mechanic, and mother wanted to give Reid and his brother opportunities he did not think they would get in Scotland.  His dad loved country music and was a fan of Jim Reeves and Charley Pride, his mom was a soul music fan and loved to listen to Motown and Stax acts, like the Temptations and Otis Redding.  Reid, who spent his teen years in Brampton, ON, eventually attended Bishop’s University in Lennoxville, Quebec, where he was a kicker on the varsity football team and met his wife Jennifer.

His first record, titled Another Day, Another Dime was released in 1997.  No singles were released.  His second album, a self-titled album, Johnny Reid, was released in 2000 and the singer got his first taste of radio play. However, none of the singles released charted higher than #41. He signed to Open Road Recordings in 2004 and released his third album, Born To Roll, in 2005. It was with this record that Reid really started to get noticed.  His first two singles from the album (‘You Still Own Me’ and ‘Sixty To Zero’) made it into the Top 20 of the country charts and then Johnny Reid released a song that is still a fan favourite, ‘Missing An Angel.’  The song was a bona fide hit, peaking at #6, and Johnny was on his way to becoming one of country’s biggest stars.

Born To Roll eventually became Reid’s first Gold album and ‘You Still Own Me’ became a hit in the U.S. for Emerson Drive.  The singer followed that success with ‘Kicking Stones’ in 2007. The album spawned a number of hits including ‘Darlin’ which was Reid’s first Top 5 hit.

Kicking Stones earned Johnny Reid his first industry recognition.  The album was nominated for a Juno and he won three CCMA Awards, Male Artist of the Year, Top Selling Canadian Album, and Independent Male Artist. Not only were people buying his records (the album was certified Platinum) but they were checking out his live show.  One of the soul singer’s strengths is his gift for performing, he’s a natural entertainer, and as the hits picked up so did the tour schedule.

In 2009 he released Dance With Me.  The album debuted at #1 and would eventually be certified 2XPlatinum.  The title track, ‘Old Flame,’ and ‘A Woman Like You’ were all hits and Johnny won his first Juno Award (Country Album of the Year) and was voted Fans Choice Entertainer of the Year CCMA Awards. In 2011 he released A Place Called Love, and the album showcased the grace and humility that is such an enduring part of Johnny’s appeal; highlighting both his personal growth as a songwriter, and his capacity to speak to his audience’s most deeply held hopes, fears and dreams with an authenticity few can muster. The album went 2XPlatinum, the tour was a huge success, and the album included two inspirational hits, ‘Today I’m Gonna Try And Change The World,’ and ‘Let’s Go Higher.’ Let us know your favorite Johnny Reid song, take the TC fan poll here.

At a time when many artists are finding it difficult to build lasting ties with listeners, the Canadian bred, Johnny Reid commands a degree of loyalty from his audience that deepens with every record.  This month Johnny released his latest album, Fire It Up, and he’ll soon be hitting the road on a 28 date Canadian tour beginning in April.  By choosing Fire It Up as the title for his latest record, Johnny Reid has never been more direct about what he wants to communicate to his audience, “My intent for this record was to say, it’s a beautiful morning, so let’s get up, get out there and help someone. Let’s make a difference.”

Throughout his life and career, that conviction has guided Reid’s every move. He brings it to his songwriting, he brings to the stage night after night, and on Fire It Up, he brings it to life with more energy than ever before. “I’ve said this many times. The world is only what you make it, and even in the deepest of darkness, you have to find the light.”

Reid knew the sound the record should have before he walked into the Nashville studio to record Fire It Up. “I really wanted to have a rejuvenation take place in the music; to beef up the bottom end on the drums and get a bigger sound. By the time we recorded – how we wanted these songs to sound, the solos, the instrumentation – that was all very clearly defined.”

While he’s broadened his musical palette substantially, as producer of the album he’s also taken care to ensure Fire It Up maintains the integrity and honesty of his previous records, and depended heavily on the musical elements that are a hallmark of his sound. The blazing Hammonds, punchy horn arrangements and rich orchestral textures are all still there. In addition, on standout ballads like ‘Dedicated To You,’ Reid picks up the thread of past hits such as ‘Thank You’ by offering his gratitude to his wife and family, as well as to everyone who has given him their unceasing love and support over time.

“By the end of the record I want people to have a positive feeling about life and the world we live in – to say, ‘If it is love that makes the world go round then let’s make it go faster? Let’s have a party. Let’s Fire It Up.”