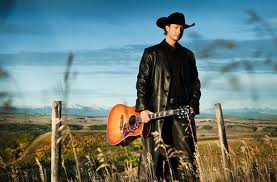 Top Country’s first Spotlight artist is country star Paul Brandt. After taking a few years off to write and start a family, the Alberta born singer is back in the thick of it on the country music scene.  He has just released his 10th album, Give It Away, as well as a box set titled Now. He has also just finished up the first leg of his Now tour, with the second leg set to begin in February.  Click here for tour details.

He first broke onto the country music scene with his hit My Heart Has A History.

My Heart Has A History was released in 1996 and since then Brandt has written a number of hit songs, entertained music fans around the world, and won a shelf full of awards. But just as important to Brandt is the volunteer work he has done helping those less fortunate.

Since an early age he has felt the need to assist others and before his music career took off he was pursuing a career in medicine. Over the years he and his wife, Liz, have worked with a number of charities, both here at home and around the world in countries like Bosnia, Cambodia, Ethiopia, and Uganda. Most recently, Paul has created his own foundation, The Priceless Gift of Hope Foundation. Go to  priceles$. for more information.

Most recently Paul was asked to write and record a theme song and video for the 2012 IIHF World Hockey Junior Championships taking place in January in Edmonton and Calgary. The song is called I Was There, and all the characters in the video are honest-to-goodness Albertans who embody the spirit of grassroots hockey. Check out the video here.

Through his music and his charitable works TopCountry Spotlight artist Paul Brandt continues to create and inspire.