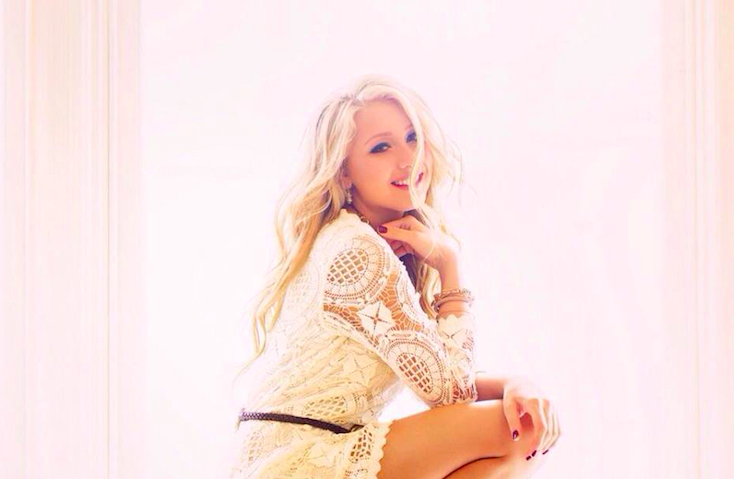 Our Pick Of The Week is Madeline Merlo‘s brand new single Honey Jack – listen to it here! It’s a great summer anthem to add to your playlist that goes a lil somethin’ like this: “Oh Honey Jack, in our glasses, kissin’ me, slow as molasses. Strong and sweet, just like me, want another round of that. Oh toss it back, let me be your Honey Jack”.

Originally posted on Elle Canada on Jul 17, 2015, read this great article to find out what makes us love Madeline so much.

CHECK OUT: Madeline’s Throwback Thursday Web Series called ‘Decades’ at CMT.ca – View More
In the third installment of Decades, Madeline wastes no time showing off her talent as she picks up an instrument and puts her own spin on Magic!’s “Rude.”

#dreamchaser: What it’s really like to break into the country music scene

Ever wondered what it’s like to try to break into the country music business…as a Canadian? Shania Twain did it, and in this generation we have up-and-coming BC native Madeline Merlo, whose new single, Honey Jack, is out today. The 21 year-old released an eponymous EP last summer, is currently working on a album…and also just wrapped filming a movie called Country Crush, where she plays (what else) but an aspiring country singer.

ELLE Canada sat down with Merlo to talk the highs and lows of chasing a dream, why she believes she’ll make it, and what it’s really like in Nashville.

I got signed about a year and a half ago with one of the biggest labels in Canada when it comes to country music. They spent 8 months just developing me, and that is something I really treasure. Now that I’m here I feel prepared and ready to take on everything.

Is this something you’ve always dreamed of? Were you the three year old dancing in front of the mirror with a microphone?

My father was a musician as well, so I grew up with band members all over the house. I performed for the first time when I was 6 years old at my kindergarten talent show, and loved it. At 6 years old I knew that this was what I wanted to do with the rest of my life.

What were you doing as a 9, 10 year old to prepare for this?

Anything that would have me—talent shows, singing competitions, musical theatre and acting in commercials. To be honest I didn’t get a lot of them, I didn’t win a lot. That’s always made me work hard. When you come in last place andyou’re 10 years old, you feel pretty bad. My mom was like ‘do you want to do another one?’, and I was like ‘Yes, that’s what I want to do’. You’ve got to do it because you love it. I have really thick skin and I’m ok with being told no but I’ll knock on your door tomorrow.

Where did you get that thick skin from?

I had a really supportive family right from the beginning. My mum was like ‘let’s do this, I believe in you’. It made sense—my father is a musician and he gave me my voice. My mom put me through that stuff because she knew what was ahead of me. It’s not an easy industry to be in.

Shania Twain was my first concert when I was 10 years old. I sat in the back row and just had my jaw on the floor. I shot the video for my single ‘Alive’ in Las Vegas. while Shania was doing her residency there. My mom and my sister and were like ‘we have to see Shania’. I had a moment when she played ‘Up’. I had tears running down my face. I was 8 years old listening to this song. I player her songs till the CD broke.

What would it mean to you to perform with Shania?

My friend West Mack is actually opening for her. I don’t think there’s a word for how envious I am! I think I’d be really, really star struck. I’d be a bumbling idiot around her. I’d tell her how much she influenced me. Music has always been something I loved and something I wanted to do, so to see a Canadian, who grew up in a tiny, tiny town literally take over the world, it really brought my dreams into, like ‘maybe I can do this, maybe this is possible’. She just inspired me a lot.

Do you have a moment in your life when you realise like ‘I’ve gone from singing competitions in Vancouver’ to ‘this might actually happen for me’?

There wasn’t one instance, but the moment I heard my voice coming out of the radio I sobbed for like 20 minutes.

Do you remember where you were?

I had a party in the studio with my mum and my sister. We just waited by the radio. When it actually happens it just takes you by surprise. You’re just lucky, who gets to experience that? As a singer, that’s a really big honour.

You said the record label developed you for 8 months. What did that entail?

I’m a songwriter as well so I write a lot of my own music. I’d send them my songs and they’d be like ‘cool, but you can do better’. It’s about seeing potential in some thing, playing more shows and being in the studio more, working on your craft. At the time I was really, really eager, like ‘just release something, I’m ready’, but I wasn’t ready. When I did I was so happy I didn’t, because I wasn’t ready.

Why do you think you’re ready now?

I’ve dedicated every ounce of my being. It’s in my brain 24/7. I work really, really hard all the time.

Have you ever had a genuine moment where you thought of packing up your bags and doing something else?

For a split second. The first time I went to Nashville, the amount of talent out there was overwhelming. You’re in a restaurant, and there’s a singer on the stage and they’re incredible. There’s so much talent down there.

There’s a scene where [aspiring songwriter] Gunner gets a royalty check for $400,000 [for a song he wrote]. I suppose for huge Tim McGraw songs you might get that amount of money, but you’re not going to get one cheque with that amount. Also, [aspiring singer] Scarlett went from nothing to something so quickly. People bust their gut for years and years. Otherwise it’s pretty accurate…it’s a tough business.

Have you had that experience of people around you saying ‘maybe you should be more like so and so’, ‘it’s not working’ etc?

Luckily the label that I signed with has been very like ‘would you say that for the rest of your life?’. You have to be very careful with what you put out there. At high school in graduation, when people say on stage what you want to do, they were like ‘Madeline wants to be a singer’, and there was a slow clap in the audience. People are saying ‘are you really doing that?’, teachers are like ‘are you sure’? You have to kind of brush that off, I guess.

Have you thought a lot about who you do want to present? Are you very thoughtful about that?

Absolutely. If there’s one thing I’m not going to do. You’ve got to have your morals, that’s very important to me. You have to know what you’re willing to and not to say and what to sing about. You are a role model whether you like it or not. I’m just going to be Madeline and see how that goes.

Who is Madeline, then?

I guess I just don’t take myself too seriously. I’m always wanting to see the good in everything, I’m a very positive person. My mother was the same way. I love my family and my friends and I love the world and want to do some good in it. I want to sing about happy, good things. If I’m singing about sad things, I want to maybe help somebody along the way.

What’s your dream for how this all ends up?

I’d love to be a huge star and have a long career. I don’t want to go up and then go down. I want to make music until the day that I die, to be 80 and on the stage, playing my guitar and hopefully still sound the same.

Have you found it easy making friends with other women in similar situations in Nashville or does it feel competitive?

I think with anything, if you’re in the same field, it’s going to be competitive, to a certain degree. But you need to support each other, in everything. Women need to support women and empower each other. Country is really male dominated: for every 10 male songs getting played, one female gets played. So when there’s a female getting played, I’m rooting for them. We’re all kind of working together. Especially in the Canadian field, we’re all really supportive of each other.

What song are you most proud of that you’ve written?

There’s a song about my grandparents I wrote called ‘Worth The Wait’. They love it, they burnt it to a disc and sent it to all their friends and really love it. It’s not out right now, but it’s a really important song to me, one of the first songs I wrote that I was really proud of. It’s biographic, about love and how you know when you’re in love and the types of feelings that that is. My grandparents have been married for 54 years and their display of love is so genuine, so beautiful. I think the song does a good job of capturing that.

What do you feel makes you different, what sets you apart from someone also blonde, also 21 and who also writes country music?

I’m just trying to be Madeline, 100%. I think it’s important to be kind to people. I try to be a good energy. I think energy is really important. Fill a room and shake everyone’s hand, the doorman and the waitress. I feel if you put good vibes into the world, good things happen to you.