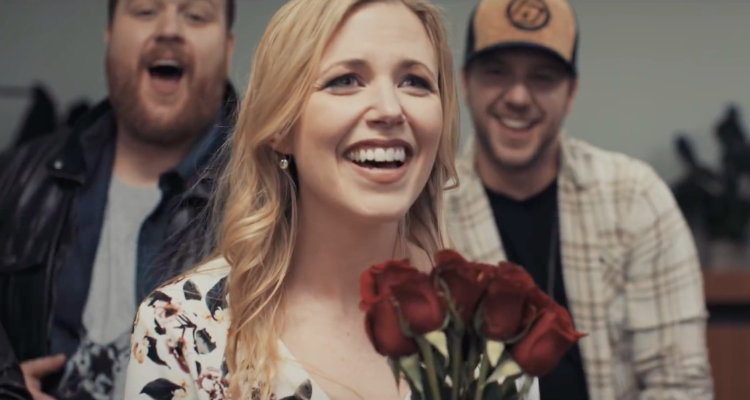 River Town Saints – You Get To Me Video [WATCH]

A grand romantic gesture goes along way in any relationship. In the new music video for “You Get To Me”, a man hires River Town Saints to send a singing telegram to his girlfriend at work. Wishing your significant other would do the same? Send them this link as a hint ;)

“You Get To Me”, recorded at Toronto’s Nobel Studios with renowned producer Jeff Dalziel (Nelly Furtado, Chantal Kreviazuk), comes complete with catchy lyrics and a retro-vibe. Lead singer Chris Labelle felt the song was a perfect fit for the group, “’You Get To Me’ has all the elements we love to record and perform live. It is high energy, has a great melody and just spoke to us when we first heard it.”

River Town Saints, (Chris Labelle, Chris McComb, Jeremy Bortot, Jordan Potvin and Daniel DiGiacomo) is known for their hit singles “Bonfire,” which went Top 10 at Country Radio, and “Cherry Bomb” which now has more than 3 million views on YouTube and was awarded Single of the Year by the CMAO. The band has been out on tour with Kip Moore and Tim Hicks, and received CCMA nominations including Rising Star of the Year.

The band has established themselves as a must-see live act, and this summer will be busy with appearances on festivals such as Manitoulin Countryfest (ON), Dauphin’s Countryfest (MB), Boots and Heats (ON) and much more.